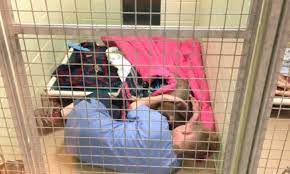 A heartwarming video has emerged of the moment that an abandoned dog was comforted by an animal shelter worker who didn’t want her to wake up alone.

Footage shows the staffer curled up with Prissy, a four-year-old hound mix, who was abandoned in hot weather in a junkyard in Tennessee with her three puppies.

Prissy was taken in by Conway Area Humane Society in New Hampshire and spayed and the clip reveals how, touchingly, kennel supervisor Chrissy Ireland was determined to help her recover.

Virginia Moore, the executive director of the shelter, told MailOnline that being spayed ‘can be traumatic and disorientating for dogs’ and that Ireland ‘felt compelled to comfort Prissy’. She didn’t want her to wake up alone, she added.

The video, which was shot by co-worker Debra Cameron and posted to the shelter’s Facebook page on July 16, has been viewed over 80,000 times and shows Ireland stroking Prissy tenderly as she stirs from her sleep. 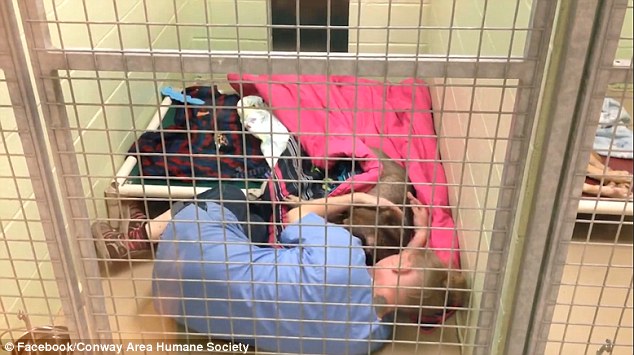 Moore said that Ireland, along with the rest of the staff, is ‘prone to laying down with the animals’, and that the video was posted to Facebook to show that shelters are great places for dogs to be.
Source