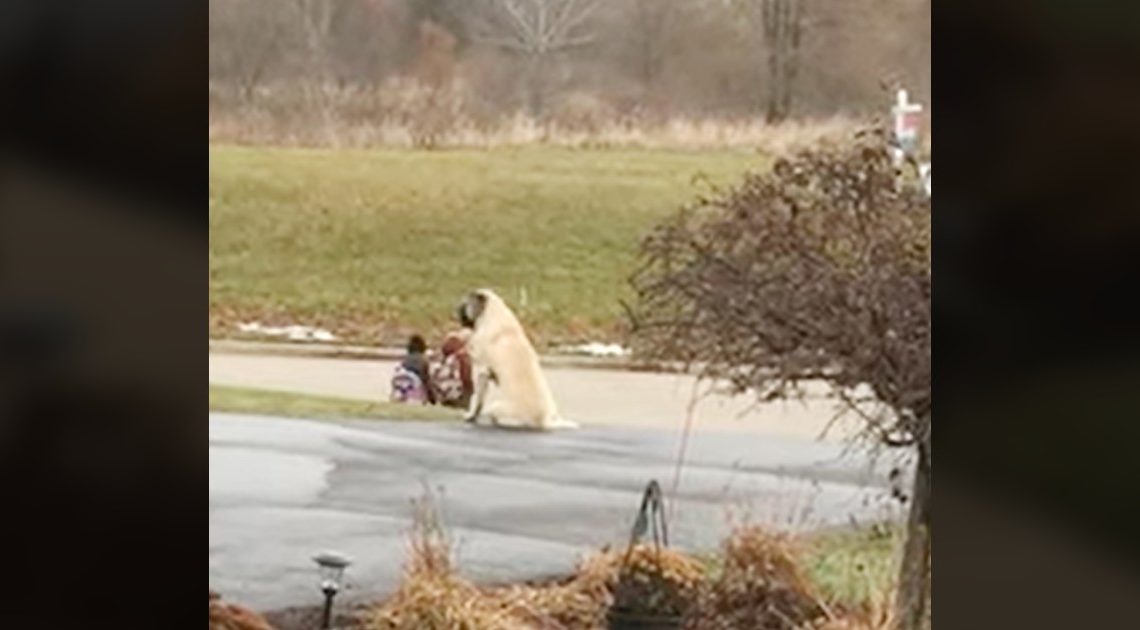 They’re pack animals, and they’ll protect those they love at all costs. And as one sweet video shows, dogs can sometimes even act as a second pair of eyes for the little ones in their house.

One parent decided to film what happens on school mornings between their dog and daughter as she waits for the bus.

The footage captured not only shows the pooch’s protective nature – it’s just so sweet.

Students across the nation, from kindergartners to high schoolers, ride a big yellow school bus every morning. They’re the safest vehicles driving around, according to the NHTSA.

We’re not able to be with our children every second during their school days. However, a lot of moms and dads will try and accompany their kids to the bus stop to ensure they get on safely.

In one family, their giant dog also takes this role very seriously. It likes to sit out front on the driveway while their little girls wait for the bus.

The adorable clip that’s been circulating the internet shows the pooch sitting like a statue while the parent films nearby.

From what it seems, it’s almost as if the dog is watching for the bus and to make sure there’s no funny business going on!

“How cuteeeeeeeee!!!!! Animals have more sense than humans give them credit for!”

A lot of us consider our dogs to be members of the family. So it makes sense that the feelings can be mutual, leading to protective behavior.

The Scottsdale Pet Hotel website explains that it’s in canines’ nature to want to keep their family members safe.

They say: “Protectiveness comes from a dog’s wolf ancestors and centuries of breeding, which means that dogs instinctively know when a human child is in need of care.”

We’ve seen stories of dogs following young kids into the wild to keep them safe – and other incredible situations where man’s best friend has deserved a medal.

The pooch might not do anything extreme in the video below, but it’s a great example of how loyal and protective our pets can be on a normal day too.

It’s almost as if its actions are saying, “Mom, I’ve got your back.”

One of the clip’s highlights comes when the yellow school bus finally arrives.

The parent records the vehicle pulling up and the kids slowly getting on. As they do so, the dog continues to sit and watch, even when his friends disappear into a seat.

It’s not until the doors close shut that the dog budges an inch. Actually, it’s quite funny to see the canine pop up quickly from the driveway the moment its job is done!

The video ends with the pup going back down the walkway to his house, his job successfully done. It’s so adorable to watch how this pup looks out for his girls — he’s certainly the sweetest dog around.

Check out the video for yourself below!