Foster Dad Adopts 5 Siblings After Refusing To Keep Them Separated 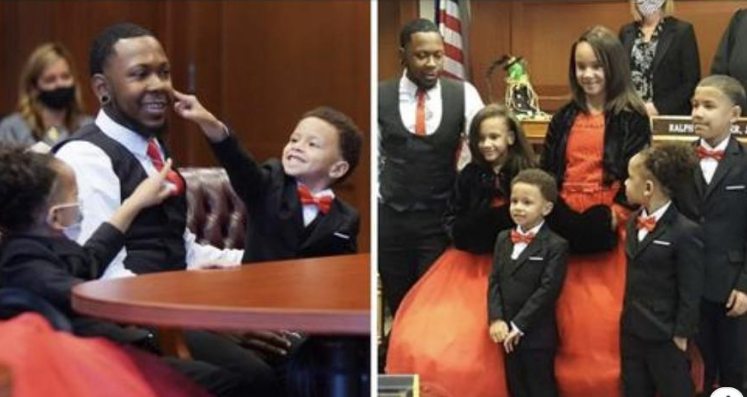 “They’re some of the best kids I’ve had,” says Robert Carter, who became a foster parent after he was separated from his own siblings in foster care years ago

An Ohio man, who was separated from his siblings in foster care years ago, didn’t want a group of brothers and sisters to experience the same thing — so he reunited the five children and then adopted all of them.

Robert Carter tells PEOPLE he was just 12 years old when he was placed in a foster home and separated from his eight siblings.

Realizing the emotional trauma that it caused him, Carter, now 29, refused to let that happen again and insisted on reuniting the three boys he became a foster parent to in Dec. 2018 with their two sisters. 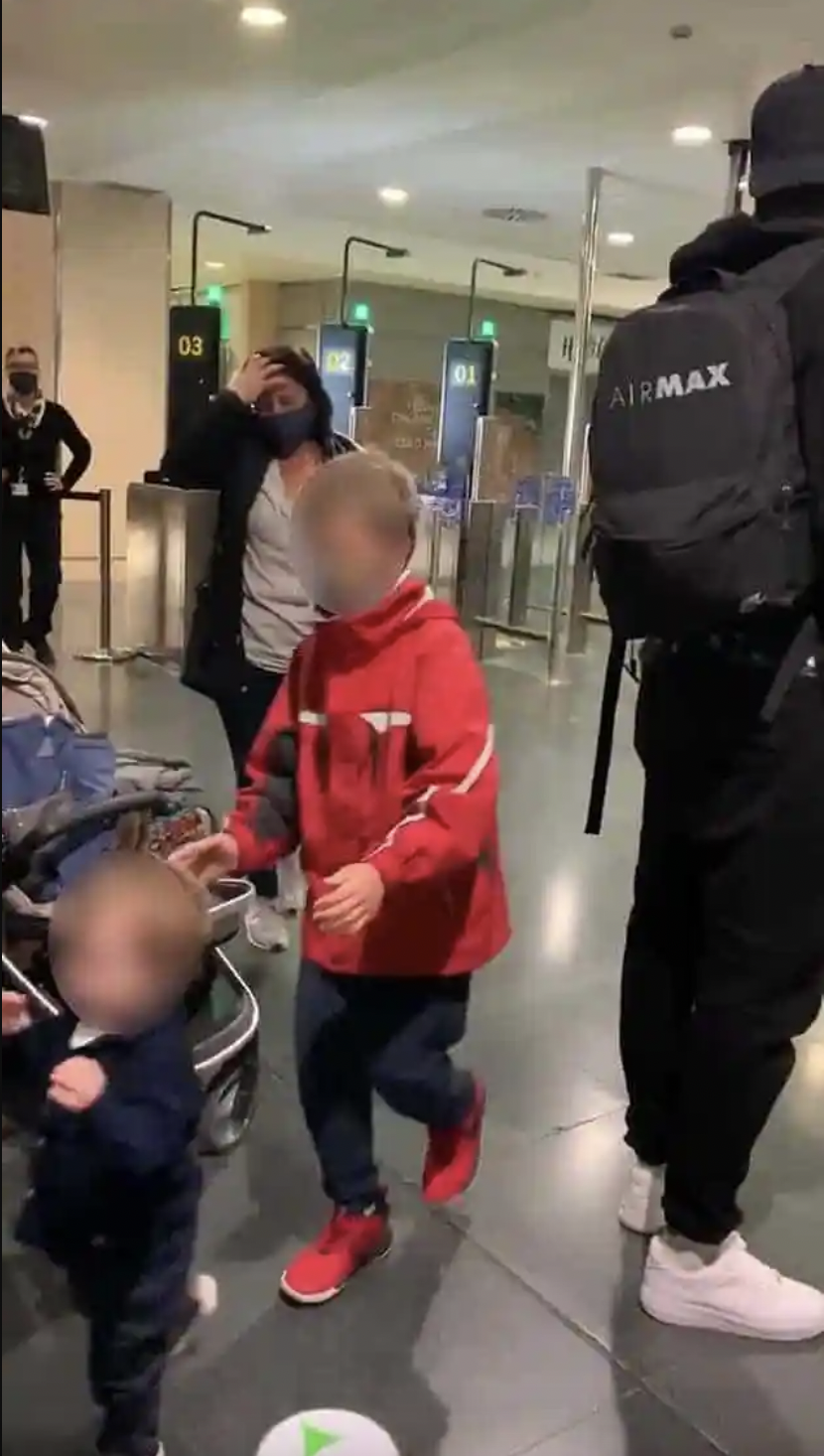 After successfully bringing the quintette together, Carter recently took things a step further by adopting all five children as his own, ensuring that the siblings will have a chance to grow old together and forever be by each other’s sides.

“I can’t even begin to try to put it into words what it means,” Carter tells PEOPLE. “Just the fact that they’re together, the fact that they have something that will help them remember their past… it’s beautiful to watch them grow up together and make memories together.” 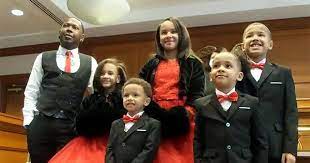 Years before Carter became a foster parent to Robert, 9, Giovanni, 5, and Kiontae, 4, he was facing his own challenges as the third oldest of nine kids.

“I was the parent figure,” he recalls to PEOPLE. “I was the one trying to feed my siblings and going out trying to find food to eat. When we got into foster care, I didn’t know where they were and if they were taken care of. That’s what set off my [years-long] depression.”

Those traumatizing memories were enough to drive Carter to find the boys’ sisters — Marionna, 10, and Makayla, 7 — and bring them together in June 2019 after six long months apart.

Carter ultimately followed through on his word, and on Jan. 3, the Ohio man welcomed all five kids into his home. By Oct. 30, he had officially become their father, marking the end of a six-month adoption process.

In photos taken during the big day — one of which was shared on Hamilton County JFS Adoption & Foster Care Recruitment’s Facebook page — Carter and his kids all wore matching red and black attire as they smiled with their paperwork.

Kiontae Gillan, Carter’s partner who he has been separated from for close to three months, was also there in support as still helps care for the kids and is considered to be their “papa,” according to Carter.

The moment was also particularly special for Carter as it came a few years after his plans to adopt two foster kids, who had been living with him for a year and ten months, fell through just two months before the adoption.

“That broke my heart but I had to keep going,” he shares. ” So up until the day of court [this time], I was thinking, ‘What if something happens? What are they going to tell me?’” 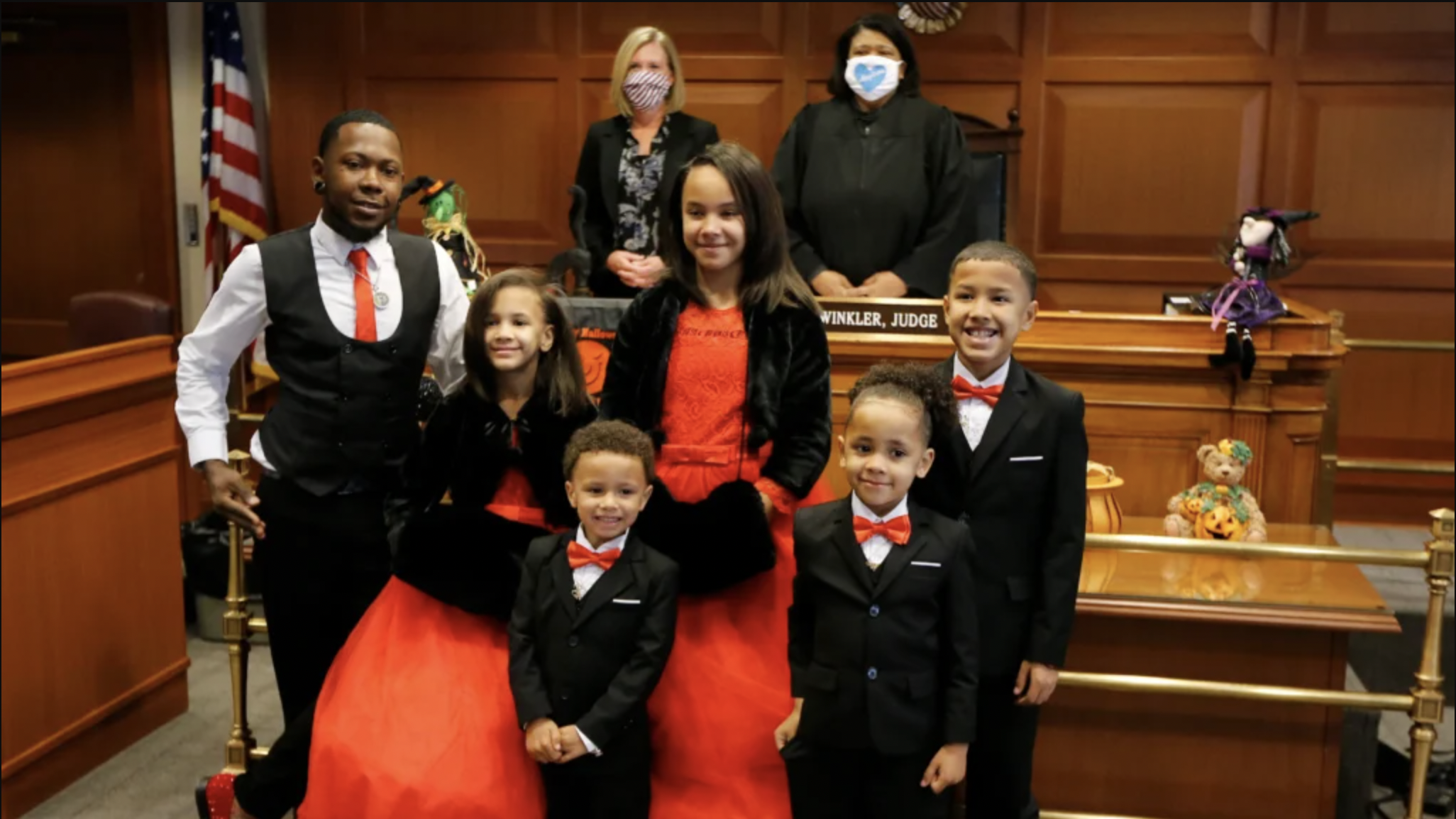 “I’m not a real emotional person and don’t like to show it,” adds Carter. “After it was finalized, I felt so relieved. I woke up the next day in complete ease. It’s a fresh start for all of us.”

In the time since then, Carter says his household has become “a lot louder than I’m used to” but he wouldn’t have it any other way.

“I’d rather have that noise and know they’re together than to not have it and have peace and quiet and know they’re separated. It’s worth it,” he says, noting how he’s enjoyed getting to watch each child develop their own unique personalities.

“They’re some of the best kids I’ve had. Kiontae’s an energetic child, he’s my child who’s gonna question everything,” he explains. “Giovanni, that’s my sweet child. He’s like an old soul, he cuddles up to me and wants to help with everything.”

“Makayla’s sweet but really goofy. She loves to dance and loves everything girly,” Carter continues. “Robert, he’s a gaming kid. He’s really smart and wants to create games when he gets older. He’s really sweet also.”

As for Marionna, who Carter sees a lot of himself in as the oldest of the five, he says she is “extremely shy” but “in charge.”

“According to her, she wants to be a model, a hairstylist and a nurse,” he shares. “She’s the mother figure to the kids… but I won’t even let her make them a bowl of cereal [now] because that’s not her responsibility. She’s done it for too long when she shouldn’t have had to in the first place.”

And while he has undoubtedly changed these kids’ lives forever, Carter can’t help but gush about the impact they’ve had on him.

“Ever since I’ve gotten the kids, I don’t suffer from depression. They’ve helped me and changed me in so many ways,” he says. “Out of nowhere the other day, Marionna came into my room and [thanked me] and gave me a hug and then ran away because she’s so shy.”

“It’s moments like that where I feel grateful that I am on my feet enough to keep these kids out of trouble and keep them safe,” Carter continues. “Anything I do is motivated by them, to make sure that they’ll be able to hit the ground running when they’re old enough.”

“They give me purpose,” he adds. “And just knowing I have my own family now for the rest of my life, and I get to see them grow up and prosper and see how far they go… it’s immeasurable.”