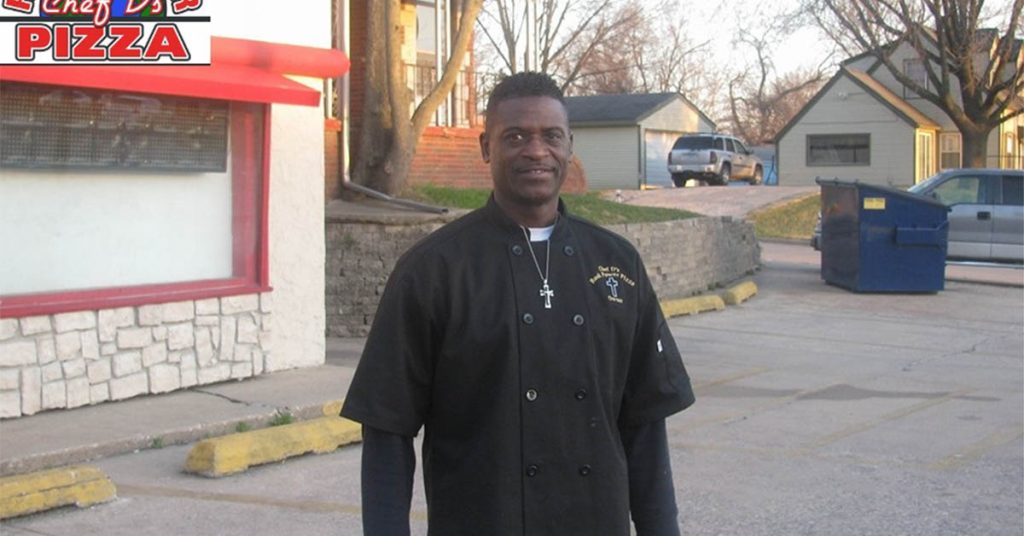 After spending years living on the streets, one kind man decided to use his restaurant to help show the homeless that they are loved and that they matter.

Derrick Walton lived on the streets of Detroit for years after having a difficult childhood, and at times he felt like he was completely alone, and that no one cared about him.

“To be homeless, you feel all alone. You feel no one cares, and you have something on the inside of you that says, well, this is my fault. I’m here, so why should they care. But, I grew to learn that, that’s not necessarily true. We still should care for other people, even if they make poor choices and decisions because, they matter. I mattered at the time. Just because I was in a bad situation in my life, it doesn’t mean I didn’t matter. But we tend to think that we don’t matter… Well I’m here to say, we do matter.” 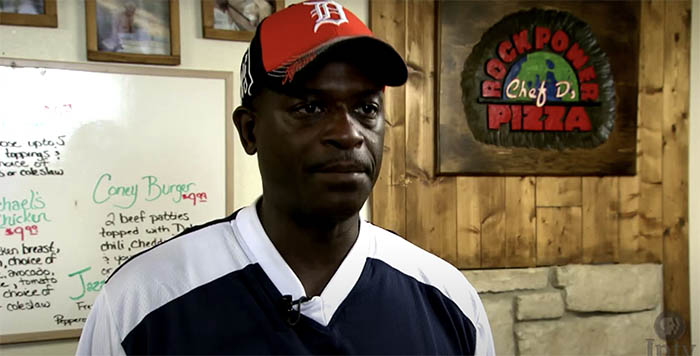 Derrick recognizes that he had made some poor decisions in the past, as many homeless and troubled youth coming from poverty have. From using drugs, to stealing, to working as a stripper, which after a run in with police now requires him to register as a sex offender, Derrick has not had an easy life, but he believes that those choices are not the sum of all who he is. His renewed faith, as well as kind people from his church, have taught him that everyone deserves another chance, and that he is still a lovable person doing his best.

Derrick recalled one of the first people who helped change his life for the better: a restaurant manager who believed in him while he was homeless and gave him an opportunity with a job. Derrick was tired of being homeless, and though he was unable to shower and only had one pair of dirty clothes which he wore every day, he tried applying for jobs in his area.

“I went place to place for employment, and I got tons of, ‘No, no, no,’ doors closed, ‘we’ll call you,’ knowing that I don’t have a number for you to call me,” Derrick said.

Just before he was about to give up, on his 10th day of searching, he went to a Greek restaurant and met a man who would change his life forever.

“Just before I was going to give up, on that 10th day, and I’ll never forget it, I went to a Greek restaurant in downtown Detroit. I met with a gentleman, I told him, ‘Look I’ve made a lot of poor choices and decisions in my life.’ I said, ‘I’m not looking for a handout,’ I said, ‘but if you give me an opportunity or a chance, I won’t let you down. I’m a great cook.’”

The kind man quietly looked at Derrick for several minutes; clothes ragged, unshaven, having slept on the streets the night before, and after several minutes, he told Derrick that he believed in him and would give him a job. Derrick shared that he will never forget the feeling he felt in that moment; when someone believed in him.

“Well he looked at me, and it seemed like, three days, but he looked at me for like three minutes, and that gentleman told me yes, right away, and he said, ‘I believe in you,’ and he threw me an apron. And when he threw me that apron, to this day I still can’t describe the feeling that I felt, because I’ve never felt it before in my life. And umm, overwhelmed with all the emotions and all these things that one person can believe in me, when tons of people did not believe in me.” 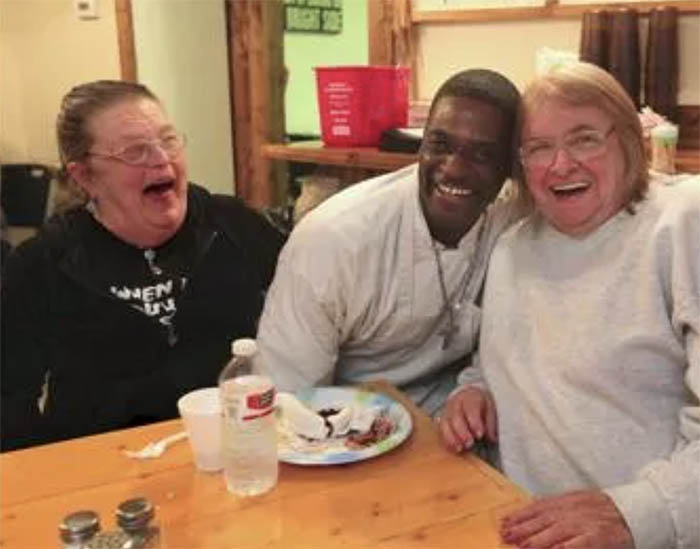 Derrick worked hard as a cook and went on to open up his own pizza shop, Rock Power Pizza in Des Moines, Iowa. His restaurant serves delicious food, has inspirational quotes on the walls, and every Monday, he closes the shop to the public and opens it to the homeless living on the streets and in homeless shelters across Des Moines. 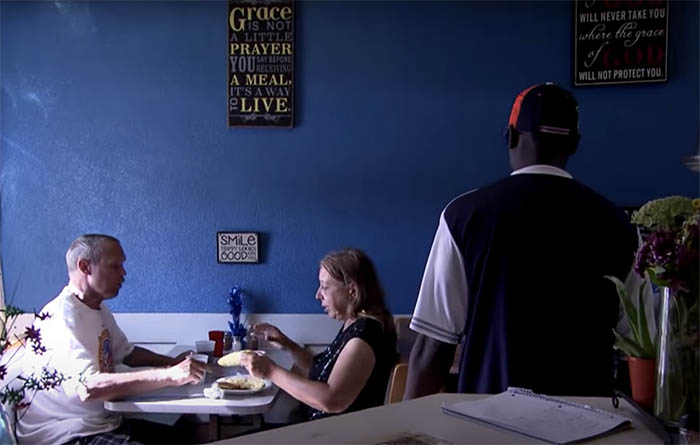 Derrick and volunteers organize vans and buses which transport the homeless from around Des Moines to his restaurant and back. They serve the homeless a variety of home cooked healthy meals: sandwiches, pastas, vegetables, fruit, and other various delicious meals. 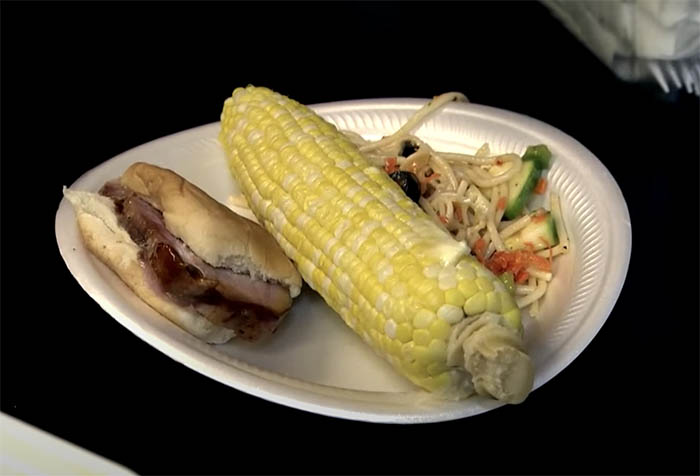 Kind people from Des Moines help donate food and funds as well to the homeless for their Monday meals, and Derrick pays for the rest. He knows how important it is to, at least once a week, provide a safe space for the homeless where they can have a night out, eat a warm meal, and celebrate life together. 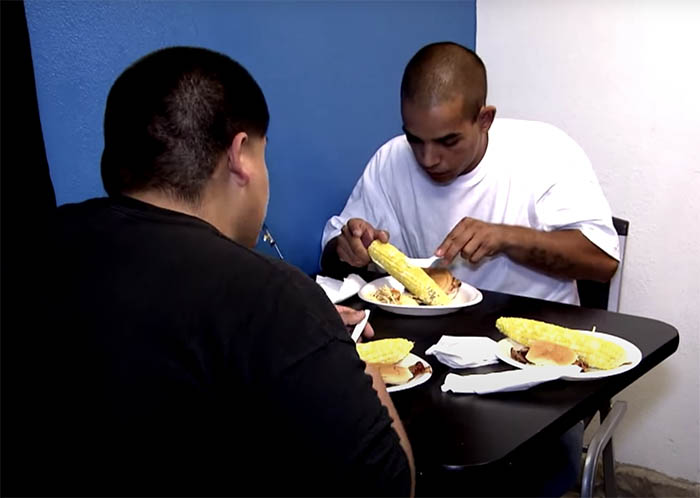 “Monday nights are very, very special to me,” Derrick said. “Before this place is a restaurant, it’s a ministry.”

“Monday night stands out apart because, it gives the people, that’s less fortunate in their lives right now, an opportunity to have a night out.”

“We get to go over here, fellowship, watch TV, be served, and treated like the amazing people they are.” 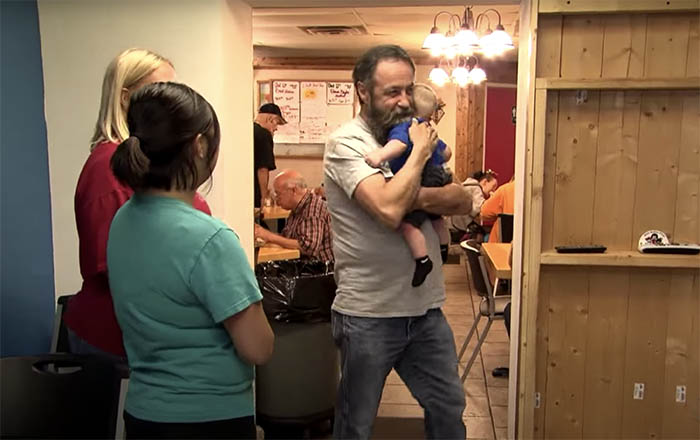 The homeless who come to Derrick’s restaurant on Mondays are deeply grateful.

“I’d like to thank all the people who have donated to Chef D’s for the homeless. The lord sees your good works. We can beat this thing,” one grateful guest shared. 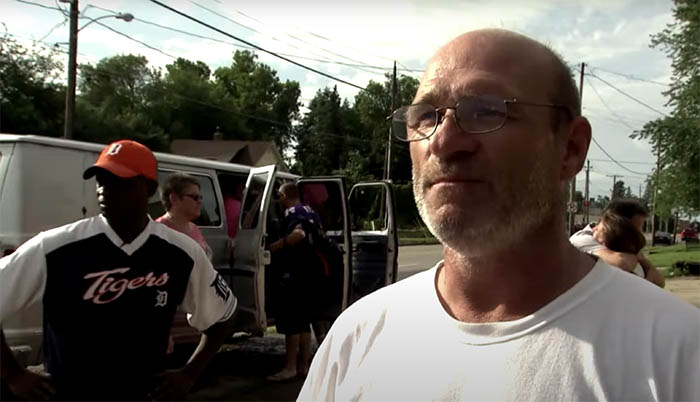 He cares. He actually loves everybody… It’s not only the free food, but you get to meet other people,” shared another homeless guest.

For Derrick, seeing his homeless brothers and sisters realize that they aren’t alone, and that someone cares for them, brings meaning to his life.

“It takes me back every single time. When I see them coming in here, they forget about all of their circumstances and situations for the most part, and they get the fellowship here. It shows them what it showed me. People do care. I still matter. So it’s truly amazing and means a lot to me… a lot to me… Monday nights,” Derrick said.

Derrick’s truly beautiful heart has helped hundreds of homeless people realize that someone loves them, and has made sure that they never feel as alone as he once felt, when he was homeless.

Watch this interview with Derrick of him serving the homeless:

Update: Derrick did have some further issues, with being in possession of a prescription pill which he did not have a prescription for, and also for not registering in the 45 day timeframe after he had moved to a new apartment for his two decade old sex offense charges related to stripping when he was previously homeless. Our systems and institutions should offer more rehabilitation and support for kind souls, such as Derrick, rather than more punishment. Derrick’s kind heart has done so much to help hundreds upon hundreds of homeless people feel loved, feel they matter, and share a warm meal, and his story of kindness deserves to be shared, flaws and all.