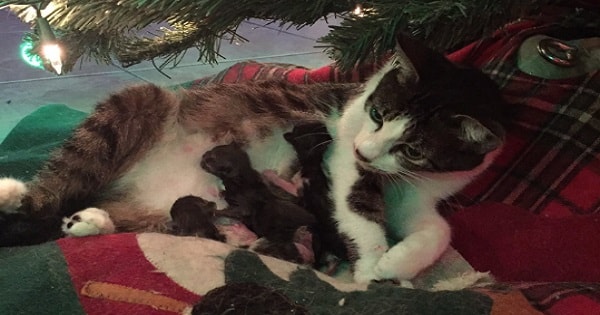 Badly wrapped presents, some random green death spikes – there’s not much else you’d expect to find under your Christmas tree.

Danielle Lopez and her cat, whose name is Tink bucked the trend by hiding newborn kittens under it this year.

Tink, who was originally a rescue, had been living with her new family, which includes male cat, whose name is Sagwa, for about three months.

“I heard a soft meow and thought it was our other kitty and then saw the firstborn crying.

I was in shock. I started running around the house to lock up [Sagwa] and grab towels to help her.

Tink gave birth to four live cats, and the family called then Noel, Joy, Christmas and Faith. Sadly, Jesus, the fifth, was stillborn”.

However, the rest of the crew is doing just fine:

And in a strange twist, Mara Wilson (the one and only Matilda), tweeted that her cat looks similar to Tink: