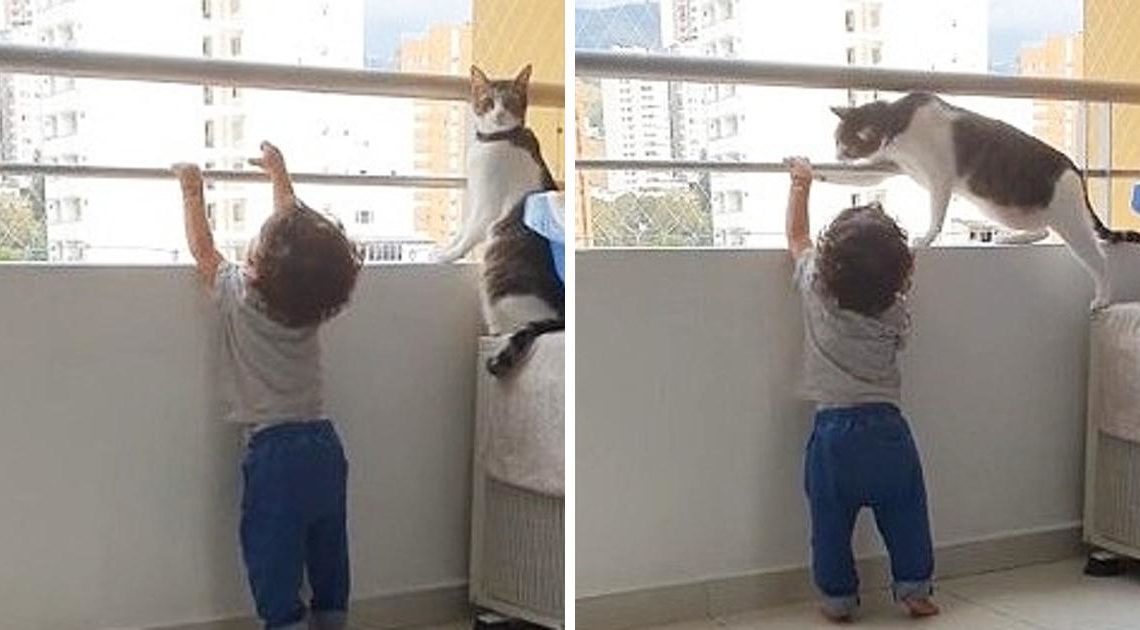 Cats sometimes get a bad rep as they have oftentimes been called coldhearted, mean, or even declared to have an attitude problem. Anyone who is a cat lover or cat owner knows just how sweet and caring these small creatures can be. What some people may not know is that cats are also pretty intelligent, as they understand object permanence and are known to have great memories. It’s safe to say that cats are full of complexities and surprises.

For one family in Bucaramanga, Columbia, their adorable cat has become their hero as the small feline helped protect a child from getting hurt. While cats are known for being extremely curious, it was the abundance of curiosity in the family’s toddler that was on full display in a video uploaded online that has since gone viral. After attempting to climb the family home balcony’s railings in January 2021, the toddler was abruptly stopped by his furry friend, who has since gone on to be seen as a brave, tiny hero.

The feline companion proved to be incredibly responsible and clearly had plenty of love for his human family. The caring family pet was nearby observing the child as the toddler tried to pull himself up by the bottom railing and stepped in to keep the boy from hurting himself. This attentive cat helped make sure the child was steered away from a potentially dangerous situation. Read on to see the video of the heartwarming moment this cat stepped in to keep his human brother safe. 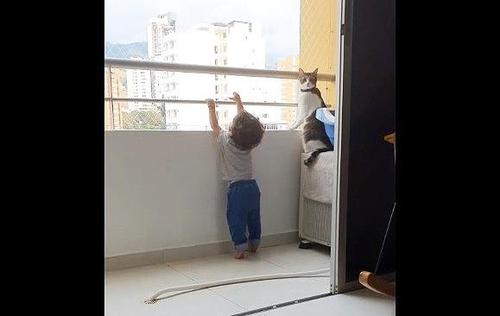 According to Rumble, the toddler in the video was just over one year old at the time it was filmed back in January 2021. He was “protected by his pet, his older brother,” after trying to climb the balcony railings he had been eyeing for a few moments, as per Rumble. In the video, the toddler and his pet cat were near each other as the cat was perched upon a piece of furniture, looking over the railings at the beautiful city. The toddler was right by his trusty friend’s side, excitedly reaching for the railing and making gibberish noises as any typical baby would.

The little one was full of energy as he tapped his feet on the ground and continued to reach his arms out in front of him. After looking back at the person filming, the toddler turned back around and went for it. He reached his hands high above him and grabbed onto the bottom part of the railing. It wasn’t long until his braveness persisted further, and he extended his arm even higher up in the air to grab the top of the railing.

Luckily, the family cat was right beside him and batted the toddler’s hand away and even appeared to nibble his hand a bit as if to let the child know not to do it again. The child did not seem to get the message as he tried yet again to reach for the railing, resulting in the cat protectively and persistently bopping his hands away.

Thankfully, the child was never in any real danger, as the video uploader explained that there was a security mesh on the balcony railings.

What did you think about this video of a pet cat keeping his human companion safe? Let us know, and be sure to pass this along to your family and friends to find out what they think, too!