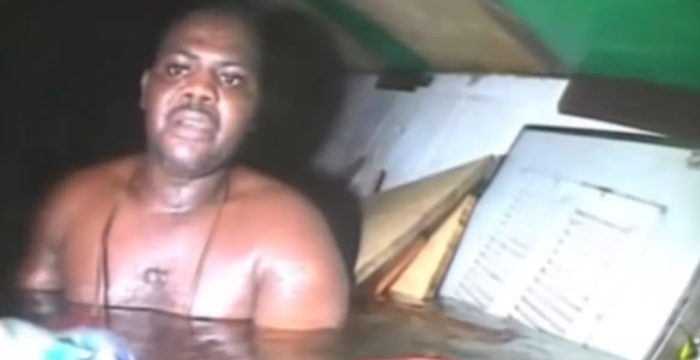 Be sure to reach the end of this article to see the full video!

Movies like Titanic have given us all an idea of what it would be like to be trapped on a sinking ship. But this shipwreck survival story is stranger than anything in the movies.

It began when a tugboat was pulling an oil tanker off the Nigerian coast.

Stormy weather was threatening the crew. Then a gigantic wave capsized the small boat, and it started sinking to the bottom of the sea.

Most of the crew members were locked away in their rooms. But Harrison Okene was in the bathroom.

Soon, the water had filled the crew member’s rooms. They had no chance of survival. But Harrison managed to find an air pocket in the engineer’s office.

But Harrison had no way of getting out. Eventually, the air pocket would become his tomb.

Still, Harrison hoped that something would save him, as unlikely as it was.

Then he heard something inside the boat. Was it rescue? But then he was horrified to recognize the sounds of flesh being torn from bones. Sharks had entered the sunken ship and were feasting on the bodies of Harrison’s former crew mates.

Harrison prayed that the sharks would not find him. He was feeling weak and knew that he would have no chance at fighting off a vicious animal.

When the sounds died down, Harrison started looking for resources. He was able to discover a bottle of coke, a vest and two small flashlights. But he knew he couldn’t use these to get to safety.

Instead, Harrison built a platform out of a mattress. He lay on this so that the ocean water would not give him hypothermia.

Three days later, Harrison heard movements within the boat once more. He assumed that they were sharks and braced himself for an attack.

But he noticed that the sounds were different. So he risked placing his hand under the water. He felt another hand grasp his.

A team of divers had gone into the vessel and were in the process of recovering the bodies. They had never suspected that one of those bodies would still be alive.

One of the divers made his way into the air pocket and attempted to talk to Harrison.

Soon, the divers had given Harrison some much-needed water. Harrison realized that he hadn’t started hallucinating. He was actually being rescued.

The other divers handed Harrison some diving apparatus. Soon, they were leading him to their decompression chamber.

When Harrison emerged above the ocean, he noticed that it was nighttime and thought that he had been underwater for an entire day.

But then the divers corrected him. He couldn’t believe that he had managed to last three days on the ocean floor.

To date, it has gained over 2.3 million views. It also has more than 6,100 likes and 600 comments. People have been saying things like this:

Harrison Okene is clearly incredibly lucky. The odds were completely against him, and yet he is alive and well today.

Watch the incredible story below!