Determined Stray Dog Rescues Himself By Walking Into A Rescue Clinic 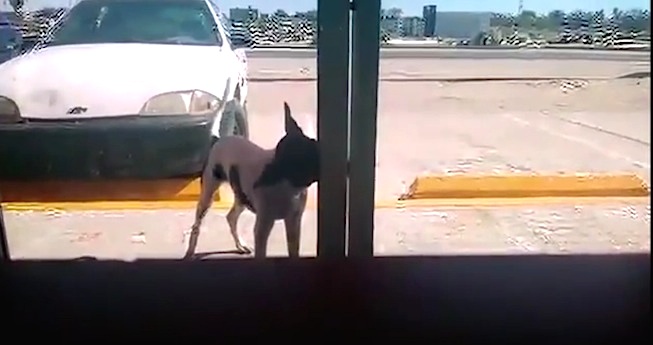 It’s not every day that street dogs in Mexico are shown compassion, but after one dog was given some much needed TLC, he decided he had enough of life as a stray and decided to get himself rescued! Compassion Without Borders filmed a video of a dog trying to get into the sliding doors of their clinic and described the dog’s heartwarming story on Facebook:

“Sometimes you get to rescue yourself.

This sweet boy was brought in as a “neighborhood” dog to be neutered at our clinic in Mexico a few days ago by a nice woman who was bringing in her own dog. He did well, recovered, and went back to the area with the woman.

Then, the day after he left, who showed up all by himself at the door of or clinic other than this handsome fellow. He just strolled up on his own, asking to be let in, and now refuses to leave.

We double checked with the woman who brought him in to confirms he belongs to no one, just roams the colony, which is very common in the area. She let us know he has nowhere to call home and has been around for many months.

So, looks like we have another clever Meximutt to head north for our next rescue.”

Compassion Without Borders says that he will be adopted out in northern California. Getting a forever home will be a much deserved (and much needed) reward for such a smart dog!