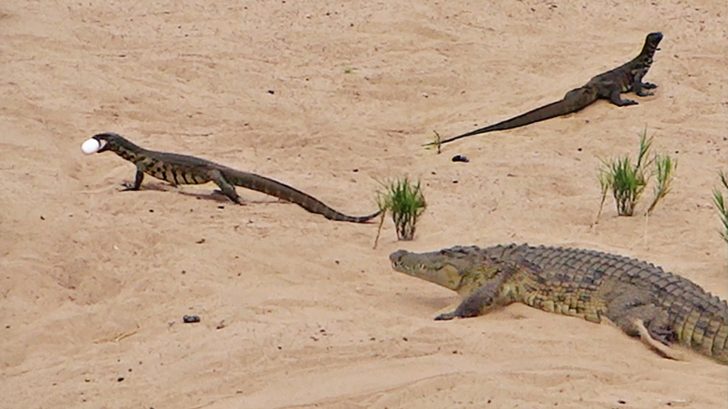 A crocodile layed her eggs on the banks of the Crocodile River, only to have two hungry monitor lizards come to claim the eggs as their meal.

“We were having breakfast when we spotted a crocodile laying her eggs in the soft white sand for all to see.”

“At first, it was so fascinating to watch the crocodile lay her eggs in the sand, kicking her feet toward the hole she had dug to keep her eggs safe. After the work of giving birth, the crocodile moved off a short distance to bask in the sun, but close enough to keep an eye on her babies.”

“We then noticed one monitor lizard coming into frame, from behind the crocodile, attempting to sneak closer, to steal her eggs.”

“After the one monitor lizard was chased off some distance away from the eggs, a second one showed up with the same goal – to steal the eggs.”

“The crocodile tried to chase the lizards away for some time, but the monitors prevailed and got what they came for… Some fresh eggs in front of La Fera Restaurant.”