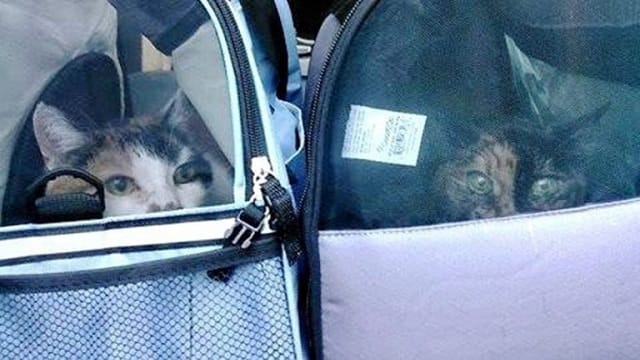 This is the story of Pepa and her sister Meli!

“They are yet another example of what happens when an owner does not have a plan for their pets should something happen to them. It’s a story shelters hear time after time,” Amanda Smith of Camellia the Cat explained to Love Meow.

We all know what the odds are of senior cats ever getting adopted and to make matters worse, Meli had to be moved off the adoption floor due to fearful and aggressive behavior.

“Being guardian to a previously terrified girl I knew I had to get them both out of there,” Amanda added.

”After a couple of small hiccups, my husband was on his way to LA, a four-hour one-way drive, to give them their ride to freedom and a true forever home”.

“When we adopted them we found that Pepa was emaciated, had severe dental problems, and was severely matted”.

“She is also the most friendly, brave, loving cat I’ve ever known. Of all the cats I have loved, none has nose booped me at every greeting the way she does”.

”She will pop out of her bed when she hears us returning from a trip. We look in from an outdoor window and see her hurrying to the door to greet us.”

”Meli is still very scared. She is slowly getting more accustomed to us and is starting to slowly come out when my 9-year-old daughter feeds her, but not for anyone else,” Amanda said.

”Though it’s so easy to want instant results, we know that scared cats take time and patience. We are giving her both. Slowly, little by little, we are seeing her begin to become comfortable”.

“We will give her all the time she needs. That’s what family does’!