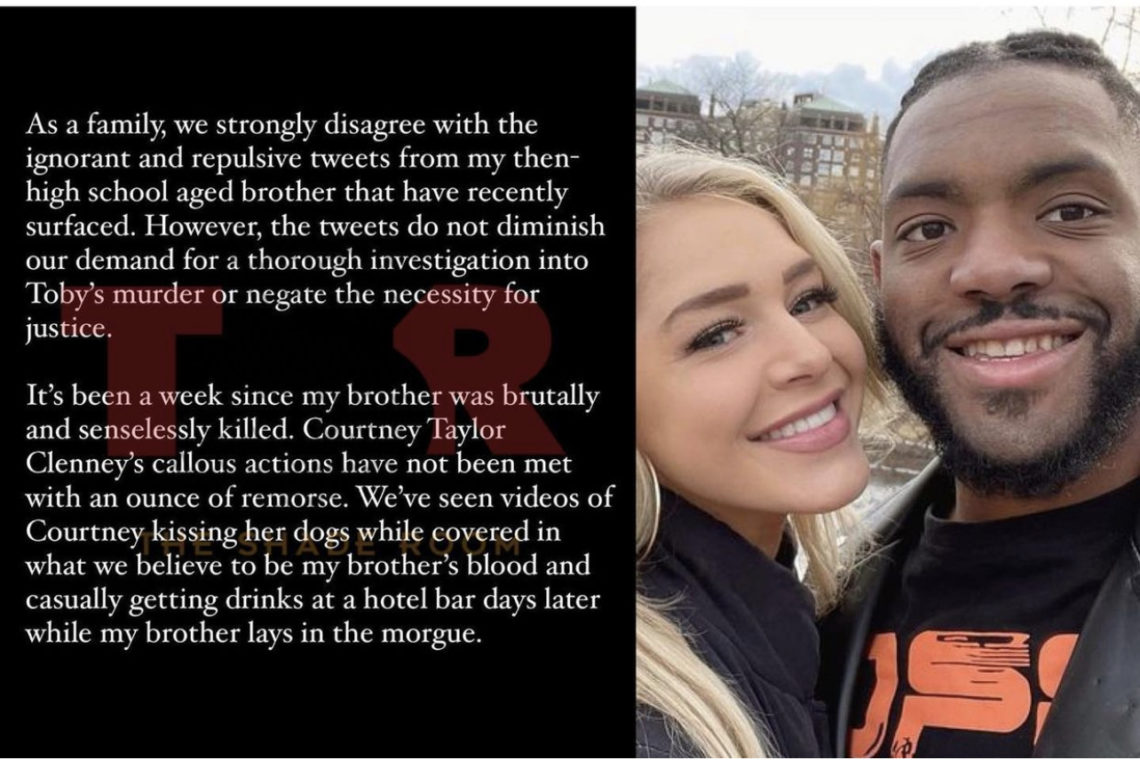 Recently we reported about the fatal stabbing of 27-year-old Christian Toby Obumseli. The past week has brought up questions about his social media use, specifically hateful tweets toward black women.

Christian’s brother Jeffery Obumseli is now acknowledging the “ignorant and repulsive tweets,” made by his brother but says his brother was in high school and that his past tweets do not diminish the family’s demand for a thorough investigation.

As a family, we strongly disagree with the ignorant and repulsive tweets from my then-high school aged brother that have recently surfaced. However, the tweets do not diminish our demand for a thorough investigation into Toby’s murder or negate the necessity for justice.

It’s been a week since my brother was brutally and senselessly killed. Courtney Taylor Clenney’s callous actions have not been met with an ounce of remorse.

We’ve seen videos of Courtney kissing her dogs while covered in what we believe to be my brother’s blood and casually getting drinks at a hotel bar days later while my brother lays in the morgue.

The bottom line is inextricably clear: Courtney is being treated differently because of her privilege as a wealthy white woman.

Within 24 hours following Toby’s death, the detective on the case prematurely concluded this was not a crime of violence.

But the information provided is deficient and the lack of transparency strongly suggests foul play is involved.

Courtney acknowledges that Toby did not have a weapon. She has no injuries to support her story of imminent danger.

Additionally, Courtney still has yet to explain exactly what happened leading up to Toby’s murder. We have every reason to believe that his death was the result of unwarranted and unprovoked violence.

We want to see that justice is served.

With family, you may not agree with every action or statement made, but it is my duty to zealously fight for my brother.

No family should have to go through what we are experiencing. We have a long legal battle ahead of us to ensure justice is served. I need your support. My family needs your support. We cannot do this without community.

God bless you all.