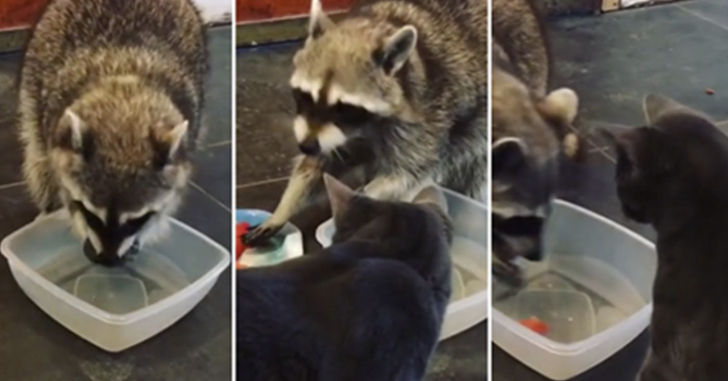 What do you do when someone tries to mess with your food? Like how about when that person (most likely your significant other) tries to steal that fry from your plate—how do you react? I know I’m one of those “get your own fries” kind of people. Bottom line, no one likes their food to be messed with, even if it’s just a water bowl.

Water bowl, you ask? Yes. Now keep tuning into the two animals in the video below to see exactly what we’re talking about. The incident below revolves around a raccoon and a cat—the raccoon is just getting ready to indulge in freshly cut watermelon wedges but he won’t be eating them without washing them first.

Raccoons, like humans, tend to wash their food before eating, and we must admit that this is a very practical and smart way of eating, not to mention a clean way as well! So the raccoon is clearly going about his routine of washing the fruit, but the cat in the video isn’t having any of it. Why? Because he’s washing the watermelon in the cat’s water bowl!

Watch how the cat gets defensive watching the raccoon use its bowl for cleaning purposes. When the mean stares don’t do anything to fend off the little raccoon, the cat actually takes to “pawing” away the animal so it will steer clear of the water bowl! This is actually really hilarious.

But don’t take our word for it!

Watch the video below to get the cat’s full reaction. And if this video gave you a good laugh, then don’t forget to share it with family and friends.