Cat finally lets his mom hold him, months after being adopted

Pharaoh the cat spent his first few years of life in the woods near a trailer park. He was frightened of people until he met his new mother.

Cheyenne initially encountered Pharaoh at a local shelter while looking for a companion for her kitten. Staff informed her Pharaoh was about 2 years old and had been brought in by a member of the trailer park he’d been living near. 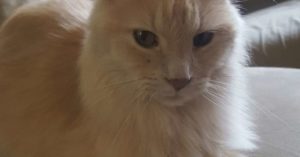 “He wasn’t exactly what I was searching for at the time, but when I saw him, I fell in love with him and knew I wanted to bring him home,” Cheyenne told The Dodo. “As a child, I had a formerly wild cat and realized what wonderful companions cats could be.” I also reasoned that because Pharaoh was still young, he would be more open to live with humans.”

Cheyenne brought Pharaoh home and placed him in his own room to help him adjust to his new surroundings. Every time his new mom entered the room, he would come over to welcome her, but he refused to allow anybody touch him. In addition, he refused to eat.

“I figured he was simply anxious, as the shelter said he’d been eating fine,” Cheyenne said. “The second day, he didn’t eat again. Finally, on the fourth day of no eating, I figured something must be wrong and I took him to the vet.” 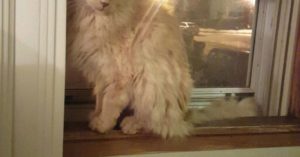 When Cheyenne took Pharaoh to the vet, the vet revealed some startling news: Pharaoh was about ten years old.

Pharaoh had severe hyperthyroidism, a heart murmur, and gum problems. In addition, he was very underweight for his age. The vet offered him medicine, which his mother believed would encourage him to start eating.

“He was certainly not the healthy cat I signed up for, but at this point, I was too close to him to even imagine not keeping him,” Cheyenne explained. 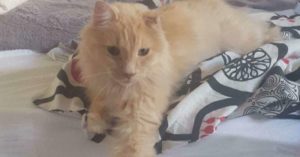 Pharaoh began taking his medications right away, and his health began to improve – but he still wouldn’t allow anybody touch him. He was still a frightened, fearful cat, and his mother had no idea what he had been through in his first ten years of life. She loved him regardless, and anxiously awaited the day when Pharaoh learnt to truly trust her.

“I was sitting on the couch when he approached me and hopped on my lap, which was unusual,” Cheyenne explained. “I patted him for a time, and when I rose up, he followed me and pawed at me on his hind legs.” I cautiously scooped him up, and he climbed onto my shoulders, purring.” 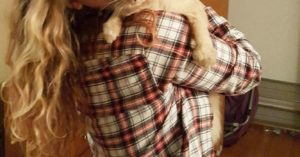 Pharaoh suddenly realized he was secure after being terrified for so long.

Pharaoh is still wary of individuals he doesn’t know, but he’s becoming more daring by the day. He’s discovering, with the help of his new mother, that the world isn’t that terrifying after all, and that his new home is filled with nothing but love.