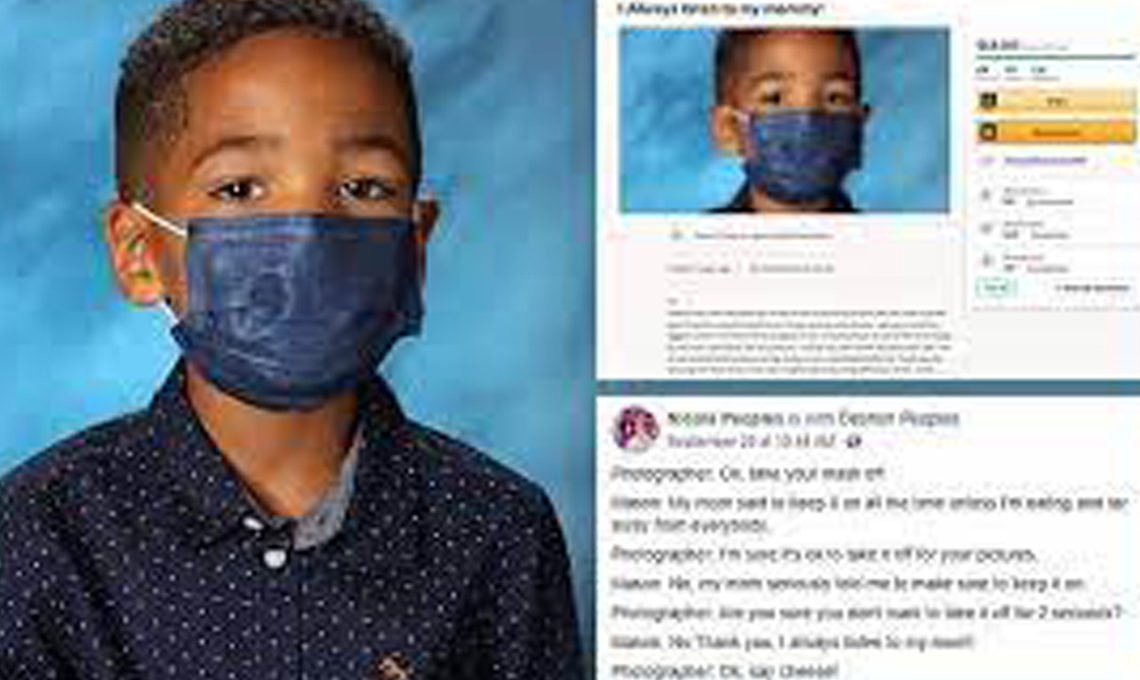 A six-year-old boy from Las Vegas has become the latest internet sensation after he refused to take off his mask on picture day at school because his mother told him not to remove it unless he’s eating. Mason Peoples’ insistence on listening to his mother is being hailed on social media, where inspired fans have donated more than $18,000 toward his college fund. 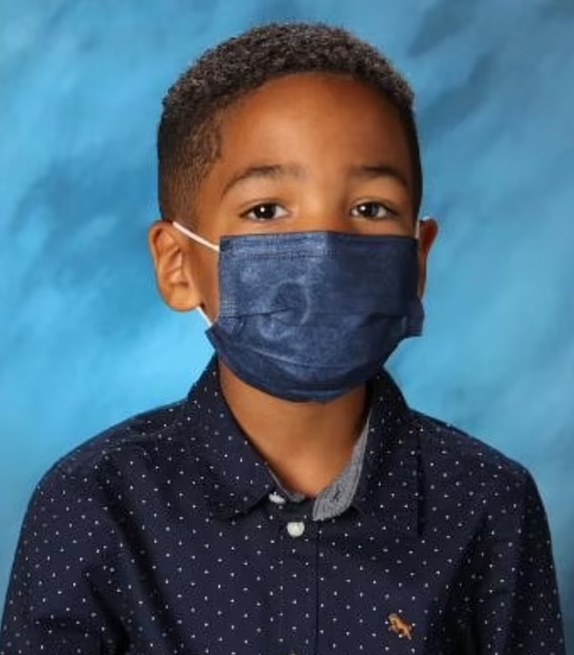 Young Mason may have taken his mother’s instructions too literally last week when he went to his elementary school where he is enrolled in first grade. When it was time to take his portrait, the photographer was sh**ked when the boy politely declined his invitation to remove his face covering. ‘My mommy said to keep it on all the time unless I’m eating and far away from everybody,’ Mason told the photographer. 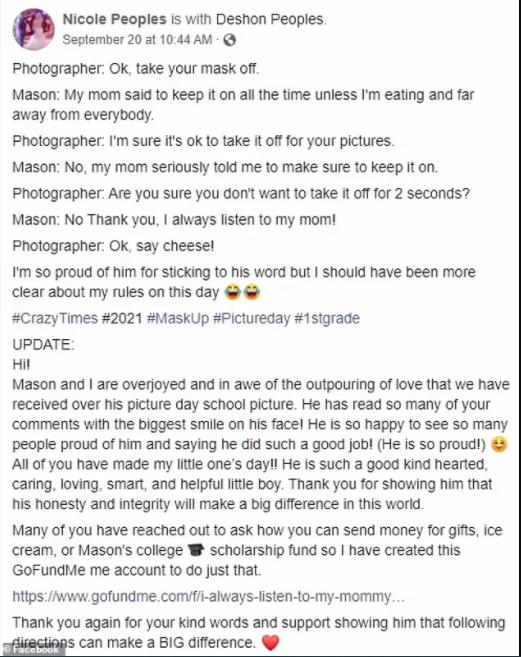 According to Mason’s mother, the photographer replied: ‘I’m sure it’s ok to take it off for your pictures.’ But the boy would not defy his mother’s instructions, even for the class photograph. ‘No, my mom seriously told me to make sure to keep it on,’ he said. ‘Are you sure you don’t want to take it off for two seconds?’ the photographer asked Mason. Mason replied: ‘No, thank you! I always listen to my mom!’ 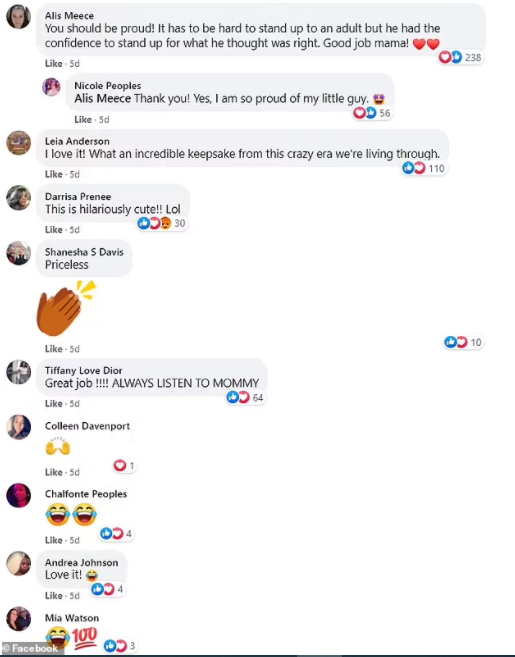 The photographer realized there was no hope in persuading the boy to ditch the mask, so he snapped the photo with Mason’s face covering hiding his smile. ‘OK, say cheese!’ the photographer said. Mason’s mother, Nicole Peoples, wrote a Facebook post detailing the original interaction. The post was written on Monday. As of late Saturday night, it has generated more than 23,000 emotional reactions and more than 16,000 shares. Facebook users praised her son. 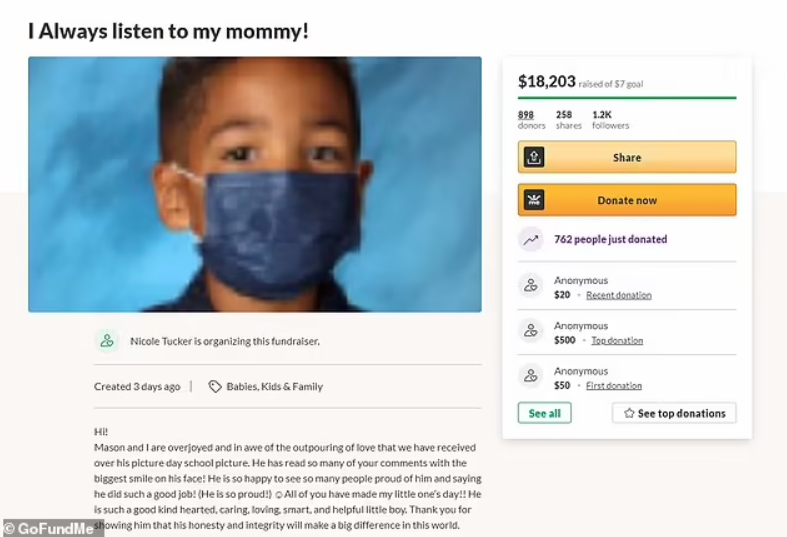 ‘You should be proud! It has to be hard to stand up to an adult but he had the confidence to stand up for what he thought was right. Good job mama!’ wrote Alis Meece. Nicole Peoples replied: ‘Thank you! Yes, I am so proud of my little guy.’ Leila Anderson commented: ‘I love it! What an incredible keepsake from this crazy era we’re living through.’ ‘This is hilariously cute!! Lol,’ wrote Darrisa Prenee. Shanesha S. Davis commented: ‘Priceless.’ The outpouring of support online and people’s wish to buy Mason a treat led his mother to create a GoFundMe crowdfunding page. 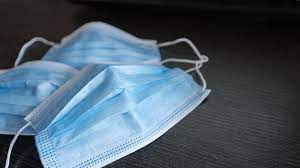 Initially, the goal was set at a meager $7 – with the expectation that it would result in a few candy bars or ice cream. But the page was deluged with some 900 donations totaling more than $18,000 as of late Saturday. ‘Mason and I are overjoyed and in awe of the outpouring of love that we have received over his picture day school picture,’ Nicole Peoples wrote on GoFundMe. ‘He has read so many of your comments with the biggest smile on his face! He is so happy to see so many people proud of him and saying he did such a good job! (He is so proud!). 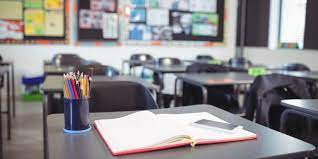 ‘All of you have made my little one’s day!! ‘He is such a good kind hearted, caring, loving, smart, and helpful little boy. ‘Thank you for showing him that his honesty and integrity will make a big difference in this world.’ Nicole Peoples told CNN that her grandfather, who raised her and was a father figure to her, d**d in January after he contracted COVID-19. That loss made her kids realize why it was important to keep wearing masks, she said. ‘He was a very significant part of our life, our daily life, so Mason was impacted, they’ve seen it firsthand,’ Peoples said. 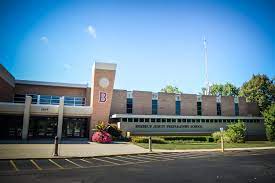 ‘So that experience really makes Mason want to wear his mask and know that it’s protecting not only him but other people, his elders and other people around him.’ She said her son follows the rules around the house as well, including making his bed and cleaning his room. ‘He’s very proud [and] he loves to show me how he’s followed the rules so that’s why he was so excited to come home and tell me about that picture story,’ Peoples said.