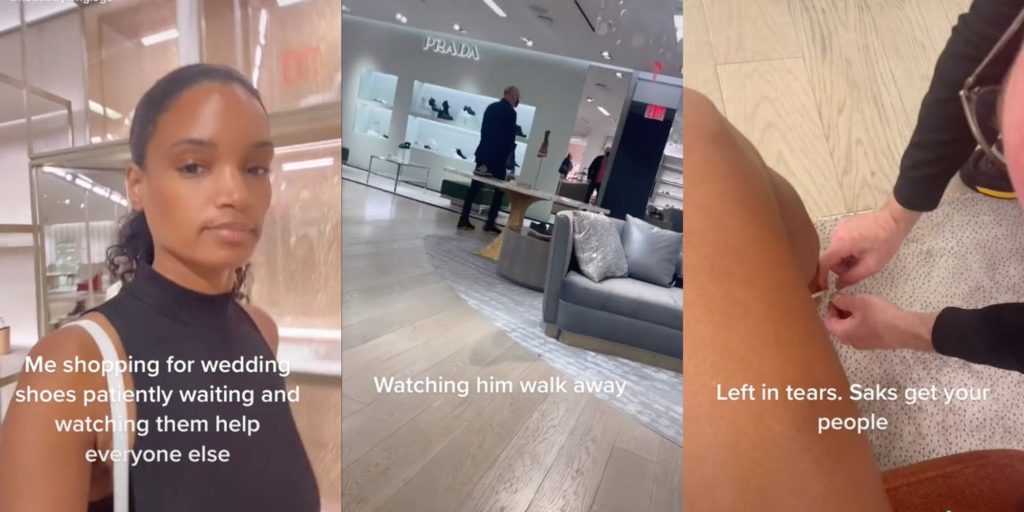 A Black NYC-based fashion model took to TikTok to reveal how poorly she was treated during a shopping trip to Saks Fifth Ave.

Erica Wiltz was shopping for wedding shoes at Saks when she realized she wasn’t receiving any customer service at the luxury retailer, the Daily Dot reports. In a video that received over 800,000 views, Wiltz revealed how employees ignored her.

“Went to #saksfifthavenue excited to buy @jimmychoo wedding shoes & it turned out like this,” Wiltz captioned the video.

In the short video, Wiltz says she was shopping for wedding shoes and had to watch other customers get serviced while a sales associate ignored her.

“HAD TO DEMAND HELP BUT HE’S STILL NOT GETTING MY SALE,” WILTZ SAID WHILE SHOWING THE EMPLOYEE FINALLY HELPING HER PURCHASE THE SHOES.

At the end of the video, Wiltz confessed that the experience left her in tears. “Saks get your people,” she added.

TikTok users were quick to blast Saks for the poor customer service that was visible on the video. With it seeming to be race-related, social media users called out the luxury retailer.

“This does not get talked bout enough! They either think we can’t afford it, or we got lost and ended up there,” added someone else.

“PEOPLE HAVE NO IDEA HOW TRAUMATIZING AND DEHUMANIZING IT IS,” WILTZ SAID IN RESPONSE TO ONE TIKTOK USER. “IT’S WRONG TO DISCRIMINATE AGAINST PEOPLE, WHETHER IT WAS CLASSISM, RACISM, WHATEVER IT WAS,” SHE ADDED.

Wiltz is set to get married in New Orleans and shared how humiliating the experience was for her.

“I’m watching the salesperson help someone else, who happened to be a white woman, but whatever, I wasn’t thinking this at the time,” Wiltz told Daily Mail. “So he’s all in her face and really being super attentive and just attending to her so carefully. They were taking a while, but I was patient.”

After wandering off and returning to let him know she was still waiting, she says the employee completely ignored her.

“HE NEVER ACKNOWLEDGED ME, NEVER SAID, “I’LL BE RIGHT WITH YOU,” BUT IT WAS CLEAR THAT I WAS WAITING. I LEFT, CAME BACK, PATIENTLY WAITING, ALL THAT,” SHE SAID. “AFTER HE’S DONE WITH THE LADY, AND SHE CLOSES OUT AND EVERYTHING, HE NEVER ACKNOWLEDGES MY EXISTENCE, I’M COMPLETELY INVISIBLE, AND HE WALKS AWAY.”

Now, Wiltz has a bad taste in her mouth when it comes to shopping at Saks.

“Until you experience that, you can’t say s*** about that experience,” she said. “Because that is the lowest a human could possibly feel.”