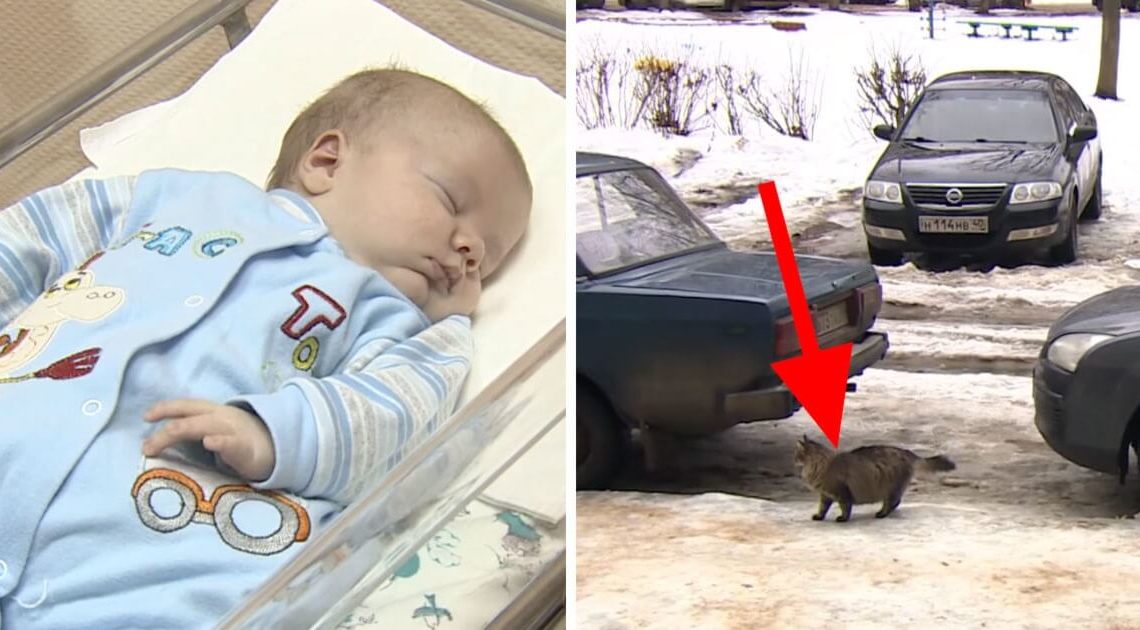 How about this for a headline: “hero cat saves baby from freezing to death in Russian street.” Yup, you read that right and yup, there is a cat in Russia, named Masha, who totally just saved a baby’s life. We knew cats had nine lives, but Masha is seriously paying it forward. Also, so much cat-lover pride right now.

Animals have a unqiue instinct and ability to perceive when something is not right.

We’ve seen countless examples of this – but here is one story in particular that especially proves just how amazing our beloved pets can be.

The protagonist of this unprecedented story is homeless cat Masha.

All her life, Masha had lived on the cold streets of Obinisk, a city in Russia.

Fortunately, there are many good-hearted people living in Masha’s neighborhood.

She is given food several residents also let Masha into their homes when it gets too cold in the evenings.

One such person is 68-year-old Irna Lavoraa who rents a house in the area. One day, as Irna was throwing out her garbage, she heard a strange noise.

It appeared to be coming from the basement. The more she listened, the more she realized that it was the sound of a cat mewing.

Instantly concerned that Masha might be hurt, Irnaa hurried down the stairs

But what she discovered down in the chilly, damp cellar space shocked her.

There lay an abandoned boy in a cardboard box on the floor. And just next to him was Masha.

Authorities later determined that the tiny boy, estimated to be no more than 12-weeks-old, had been laying alone in the box for several hours.

But the baby was warm – all thanks to Masha laying closely next to him.

In other words, without Masha’s precious company – and body heat the baby boy would most certainly had perished.

The boy was rushed to hospital, but Masha’s motherly instincts didn’t let out when the ambulance arrived to take the boy to safety. According to the paramedics, the cat chased the ambulance after they had taken off.

“She was so worried about where we were taking the baby. She ran right behind us, miaowing. She was really a rational creature,” ambulance driver Vera Ivanina told the International Business Times.

Witnesses added that the cat continued to wait for hours in that same spot hoping for the ambulance to return.

The little boy is said to have recovered well, and the police have launched a search for his parents.

“She (Masha) is very calm and friendly, so when I heard her mewling, I at first thought she might have hurt herself. But clearly, it was just her maternal instincts taking over and she wanted to protect the child,” said Irna Lavora.

Extreme kudos to Masha for this crazy act of cat heroism. And don’t worry she is being very well looked after by her neighbors and friends who have taken to “[spoiling] her rotten.” A very well deserved reward for a hero.

Did this story also warm your heart? Animals sure do understand a lot more than people think! Share and like this Masha’s heartwarming true story if you want others can also pay tribute to her heroism!