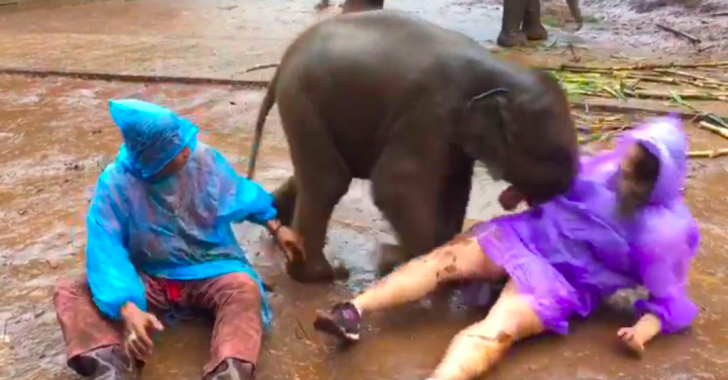 If a genie were to appear and grant me three wishes magically, this would be one of them. I don’t think it gets much better than this incident – a candid moment, that is nothing but pure, unadulterated joy. A beautiful bond between a human and a wild baby elephant that you can’t just get anywhere. This event was the unplanned perfection that unfolded naturally and wonderfully!

This woman is so lucky because it doesn’t get much better. I can only imagine what was running through her head when it all went down!

At the Patara Elephant Farm in Chiang Mai, Thailand, this woman just got to live out a bucket list game changer everyone will probably want to do now. The animal that first appeared as sneaky and potentially threatening, turned out to be adorable. What’s better than rolling around in the mud with a baby elephant who only wants love and cuddles? Please, someone, tell me, because I really don’t know.

At first, the baby elephant approaches the woman on the right, and nudges her a little harder than expected, causing her to fall over. This little guy doesn’t know his strength because he nuzzles in closer to her, trying to get her to hold him. He’s a gentle giant who just wants someone to play with! The woman cannot stop laughing as the two wrestle around on the ground. He keeps edging in closer, and eventually sits down, kind of on her and beside her! Then his back leg slips in the mud, and he gives up, everyone continuing to laugh! This clip is definitely a moment for the books!

Click below to watch what every animal lover must secretly be jealous of!