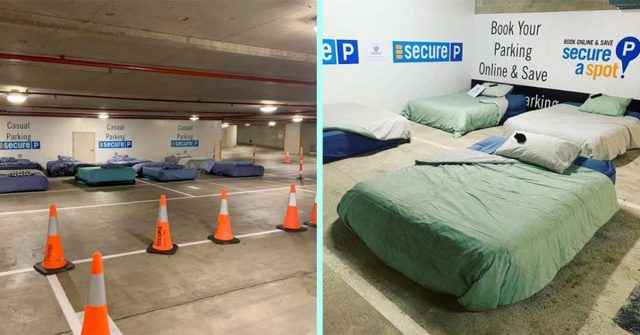 An Australian charity has found a humane and brilliant solution to helping its country’s rough sleepers; setting up warm and safe beds in unused parking lots at night.

In Australia there are more than 116,000 people sleeping rough on the streets, and in the U.S., that number has surpassed more than half a million. Homelessness is something that affects people in all areas of the globe and is something often caused by circumstances out of a person’s control; such as illness or unemployment.

Many people who become homeless are left to fend for themselves, in unsafe conditions and without anywhere to sleep. However, in Brisbane, Australia, this is starting to change, thanks to the incredible help of volunteers from the charity Beddown.

This compassionate idea came to Beddown founder Norman McGillivray as he was walking through an empty parking lot one night. He realized that since this space was vacant for the entire night, why not use it as a shelter for the homeless? It was a perfect location to give the homeless respite and a safe, secure place to sleep.

Sleep deprivation is a major problem for our homeless population, as it has been proven to increase rates of depression and mental illness.

“Many of the homeless suffer from sleep deprivation due to the conditions of living on the streets. Sleep deprivation can lead to many physical and mental health conditions, such as: Depression, Diabetes, Hypertension, Obesity, Memory Loss. It can also impair cognitive function and lead to alcohol or drug use. Those who sleep rough are security conscious too, in fear of being attacked and [having their] goods taken. By providing a safe, secure and comfortable place to get a good night’s rest, we help restore health, dignity and respect for our guests,” Beddown’s website explains.

Norman immediately asked Australia’s largest carpark operators, Secure Parking, if they could use one of their lots as a homeless shelter at night. The kind company agreed to a two week trial period, and figures are showing promising signs that they’ll get the go-ahead to continue.

Volunteers at Beddown help bring and setup inflatable mattresses with linens and pillows each night and prepare a nice stay for the homeless. 41 people have already stayed at their nightly shelter, rating the beds as 4.5 out of 5 on a comfort scale!

The charity took to Instagram to explain their dream behind the carpark shelter, saying they want to provide the homeless with as “close to a comfortable, regular bed” as they can, and ultimately to “reduce the sleep deprivation many homeless people face.” Guests shared that they felt really safe during their stay and were able to get a full night’s sleep; something that is very treasured by our homeless.

Beddown not only provides beds for rough sleepers, but also healthcare services, haircuts, clothing and hygiene facilities; a truly beautiful safe haven for the homeless.

Beddown wants to expand their program to other vacant spaces which aren’t used overnight, meaning that even more homeless people could have a decent place to sleep each night. A recent Instagram story highlight for Beddown mentioned that they are beginning to convert parking lots into shelters in Sydney, Australia, as well.

Not only does Beddown want to provide a safe overnight haven for the homeless, but they also want to help those who are homeless get back on their feet. They provide services that help with getting accommodation, education, and employment opportunities, explaining that their ultimate vision is to “put themselves out of business.”

Thousands online voiced their support and are hoping that Beddown will expand to their city:

“Amazing! God bless you all. Come to Sydney – we need you here.” wrote Rebecca M.

“Is this happening in Adelaide yet?” commented another.

“So amazing! Super proud of what Beddown is achieving,” wrote Sara H.

With so many vacant lots around the world, it just takes a few willing hearts to organize a couple of inflatable mattresses, and then the most vulnerable in our society are able to have a safe and warm place to sleep. They are able to get a full night’s sleep, with peace of mind; a simple thing which most of us take for granted. Yet to a homeless person who only gets to sleep an average of 3 to 6 hours a night, this comfortable night’s rest is treasure. We are grateful for Beddown and their compassionate volunteers, and we look forward to seeing them inspire movements all across the world which help us take care of our suffering homeless population.

If inspired, you can support Beddown’s beautiful cause by donating here.