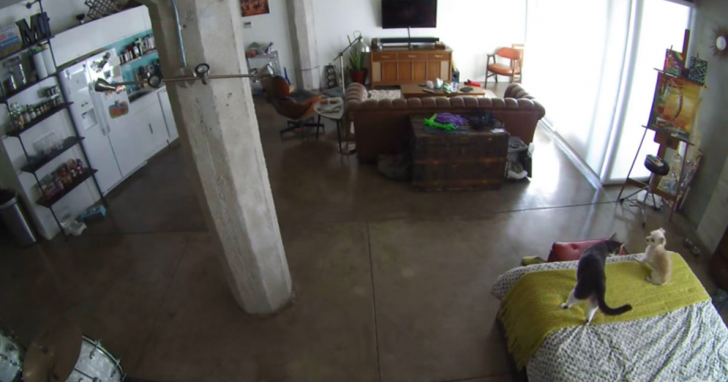 We know the saying, “If looks could kill, her look would have led to the murder of the person she was looking at.” Thankfully, they don’t, and it’s not that gruesome! However, looks can deliver a critical message from across the room or a table faster and with more stealth and meaning than actually starting a yelling match. Plus, there’s no life lost!

In this video, we see exactly that. It’s a cute and furry showdown where the reigning elder stands his ground in the face of his younger, barkier counterpart.

In this 50-second-clip, Chazz the tiny poodle is propped on the bed barking his little head off towards the bottom left corner, and for what reason? I’m not sure. The owner of the apartment, Devon Meadows, had set up a security camera while he was away visiting family, to monitor how much Chazz has been barking. He seems happy and excited, but the other resident in the household has a couple of complaints.

Greyscale is the cat of the house, and at about the 15-second mark, when Chazz won’t shut his mouth, the kitty pounces into focus. He leaps across the room, and jumps on the bed, locking eyes with Chazz. There’s no hissing. No swiping. No show of force, only a long, penetrating look that shuts Chazz up immediately. Chazz looks guilty, but at least he’s quiet! And Greyscale jumps of the — bed mission accomplished.

Click on the link below and watch this hilarious encounter between the annoyed cat and hyper dog.