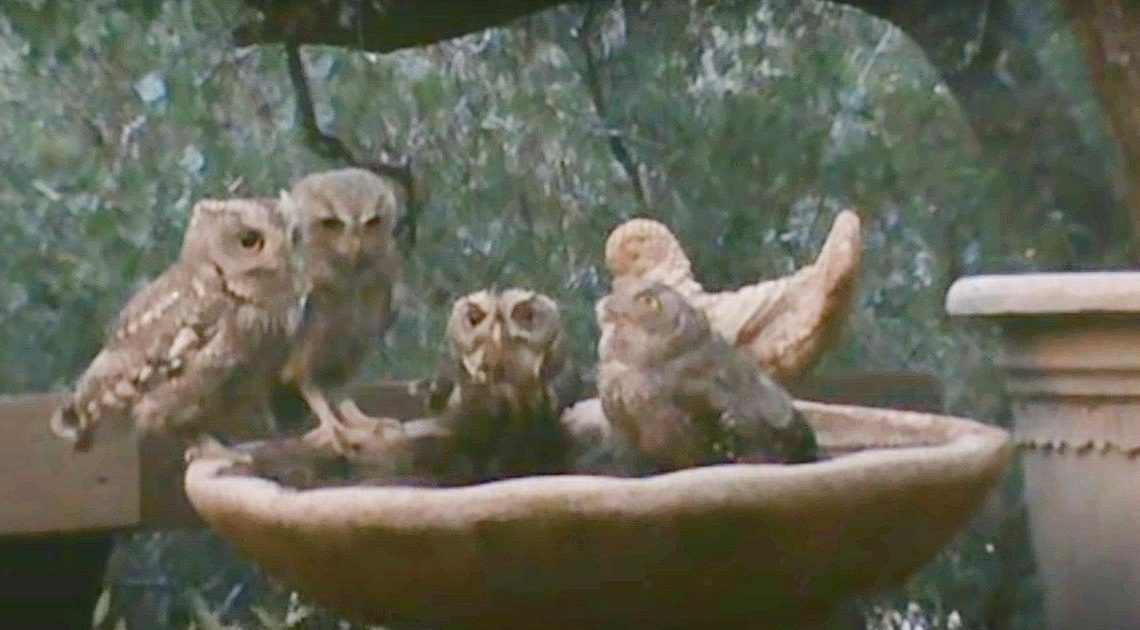 A parliament of baby owls was captured on camera enjoying a birdbath in 105-degree Texas weather.

Owls can potentially hold the world record for being the most adorable birds in existence. However, perhaps baby owls are even cuter than their adult counterparts. It’s nearly impossible to resist their round little eyes. They stare at you with such hope about the future. Their petite and fluffy bodies almost beg for a hug; it’s too bad that birds have such delicate bones because otherwise there would be lines around the block of people waiting to squeeze them into their arms all day! 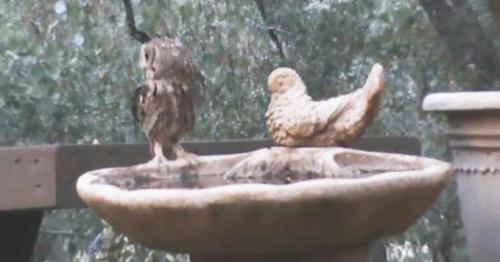 Their long legs are easily concealed by the bulk of their feathers; they almost look like Russian nesting dolls. It’s almost difficult to imagine that such delicate creatures are predators.

According to Chattahoochee Nature Center, they use their wings and sharp talons to swoop down and seize their prey before flying off to their nest to feast. However, it’s important to know that they don’t do this out of any malicious intentions, but they have a strong desire to feed their offspring and take care of their families. 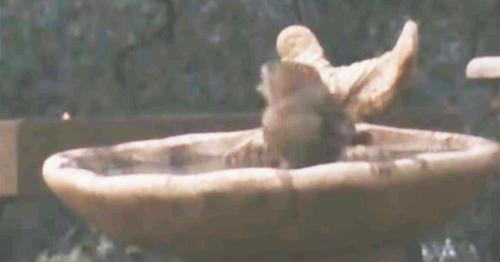 Not only is making sure one’s belly is full quite important, but so is making sure that one’s body is squeaky clean! Taking a bath isn’t always fun, especially if little humans are an example.

Frequently it’s challenging enough just to get one into the tub oh, let alone a whole crew. So what happens when outside, on a regular spring day, a typically unused bird bath suddenly becomes the local avians’ hotspot? Pure adorableness! 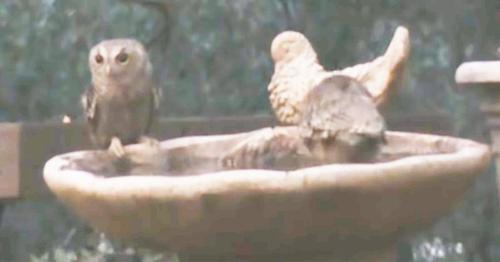 This video shows four fledgling owls stopping by the birdbath in their local neighborhood to partake in a little bit of TLC and to get their wings clean. The initial owl, a fledgling screech owl, swoops down to perch atop the edge of the ornate birdbath.

Perhaps he’s interested in the bird-shaped clay that adorns the outside of the bird bath’s rim? In any case, he’s the first of the party as he begins splashing about happily in the water. 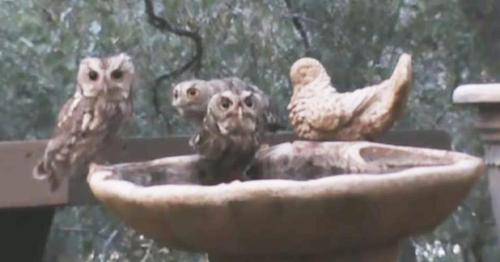 It isn’t long until he’s joined by his siblings; his head is on a swivel as it turns around and around elegantly. He must already be expecting his siblings, but it’s obvious that his reactions tell us, “Am I really this early to the spa?”

For a moment, the little owl’s adorable eyes perfectly meet the camera for the ideal thumbnail. It’s easy to get lost in the adorableness of the fledgling owl, and suddenly two more stop by to partake in the fun! Finally, now it’s a party! 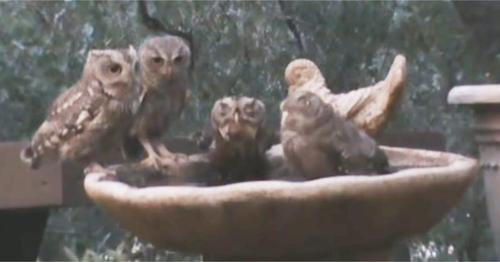 This adorable scene takes place in the scorching state of Texas, where it is not uncommon for some areas to reach over 100 degrees Fahrenheit! The baby owls dunk their heads in and out of the birdbath to cool down. It’s obvious that they’re thankful to the human for being so kind as to provide them with the perfect place to rest after a long day of hunting or flying around! Even though owls are nocturnal, they still take care of their needs during the day.

Finally, the fourth owl shows up, and the other three give them a look as if to say, “You’re late to the party!” before making room for their sibling to splash and play along with the rest. It’s quite rare to see so many owls in an urban spot, as owls typically are more solitary birds.

Have you ever seen an owl before in your yard? What did they look like? We want to hear all about your feathered friend!