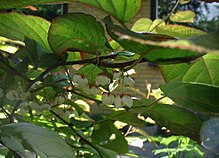 Actinidia /ˌæktɪˈnɪdiə/[2] is a genus of woody and, with a few exceptions, dioecious plants native to temperate eastern Asia, occurring throughout most of China, Taiwan, Korea, and Japan, and extending north to southern areas of Russian Far East and south into Indochina. The genus includes shrubs growing to 6 metres (20 feet) tall, and vigorous, strong-growing vines, growing up to 30 m (100 ft) in tree canopies. They mostly tolerate temperatures down to around −15 °C (5 °F), and some are much hardier.

The leaves are alternate and simple, with a dentated margin and a long petiole. The flowers are solitary or in axillary cymes, usually white, with five small petals. Most of the species are dioecious with separate male and female plants, but some are monoecious. The fruit is a large berry containing numerous small seeds; in most species, the fruit is edible. In particular, this genus is known for the species Actinidia deliciosa, one of the most common cultivated kiwifruits, and for the hardy ornamental A. kolomikta.