Abused Kitten Finally Gets To “See” What Love Is; Never Loses His Purr Throughout 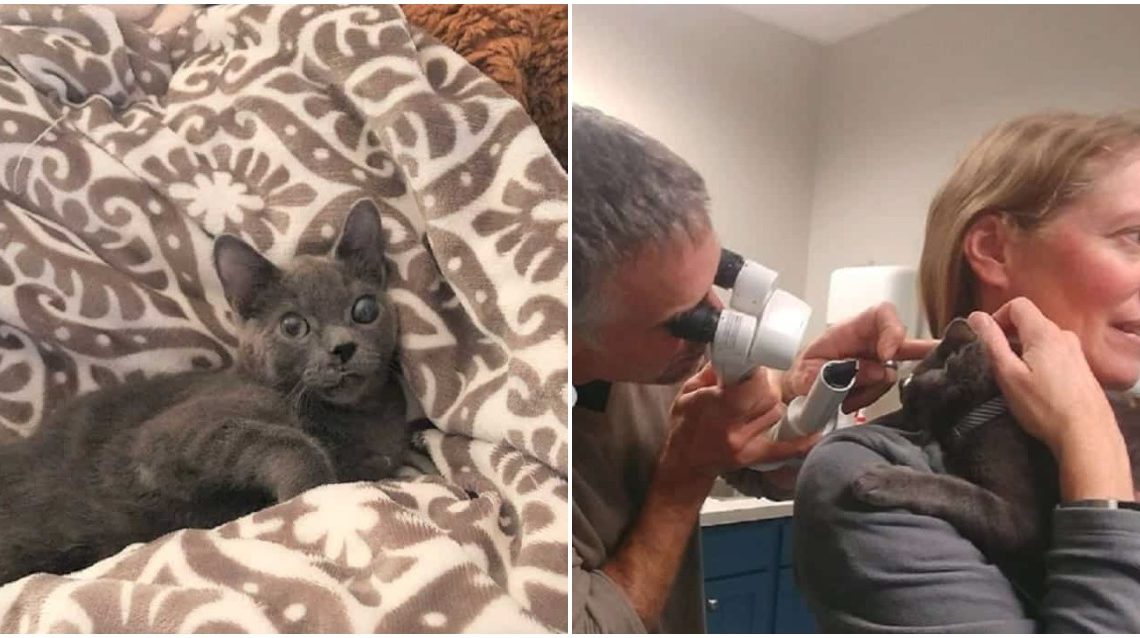 Wolfie, an adorable grey kitten with a cleft lip, experienced the worst “humankind” had to offer during the first few months of his short life. Born a stray, he had no clue what the safety and comfort of being loved held since he was born a stray. To make matters worse, someone had shamefully abused him.

Wolfie was underweight and had old injuries to his legs and hips. He was blind in his left eye and numerous teeth were chipped and cracked. There were also visual scars present on his tiny body. 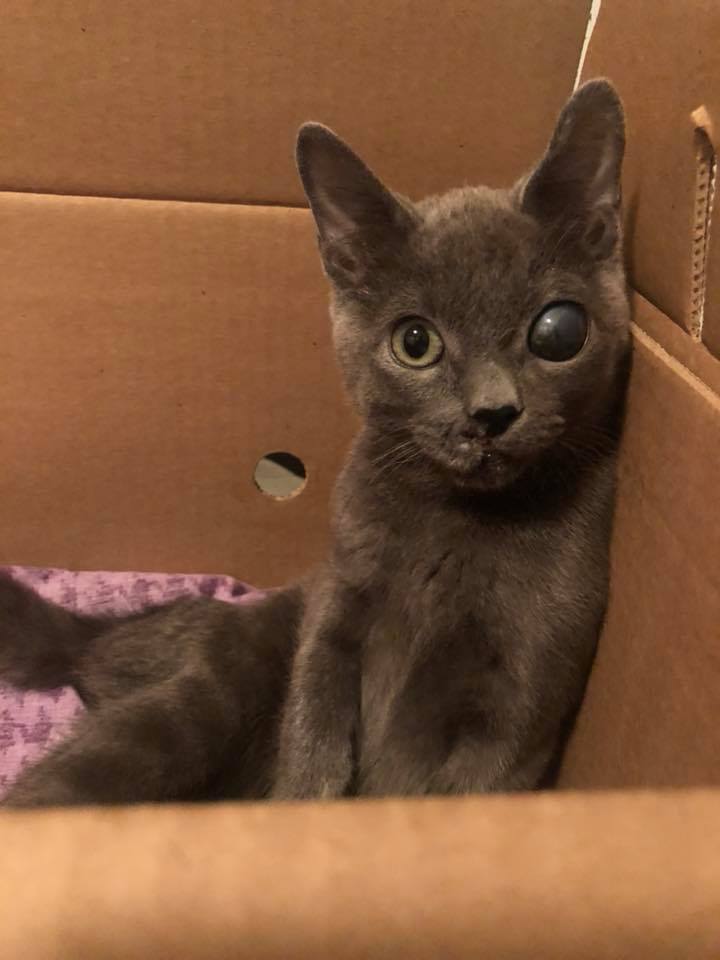 Allow it to sink in… He already had devastating scars at the age of 12 weeks.

If he was going to endure the horrors of his tortured existence, he’d need a particular person to assist him.

Fate had finally smiled upon the tiny cat, and his story had been brought to Tara Kay’s notice. 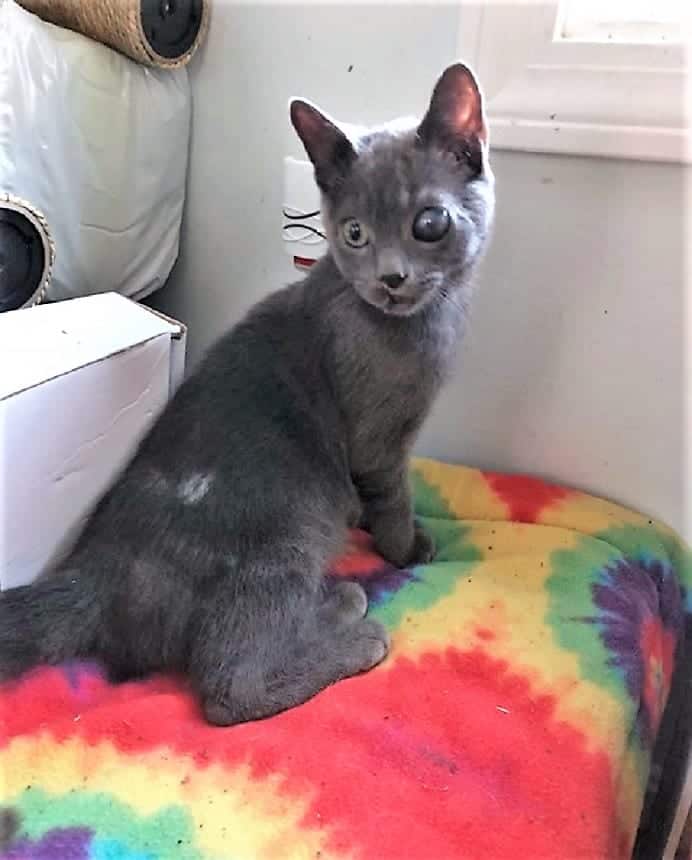 The purrfect person to step in on Wolfie’s behalf, Tara is the founder of The Odd Cat Sanctuary in Salem, Massachusetts.

It was started in 2015, so that we could help kittens and cats with “challenges” or that have been neglected. We lovingly refer to them as “Odd Cats”.

Wolfie joined the Odd Cat family in the beginning of October 2018.

Only a few days later and he was already starting to enjoy being a kitten–as much as his injuries would allow.
He even got to indulge in some catnip “therapy”! It made all the difference in the world just having someone to love him. 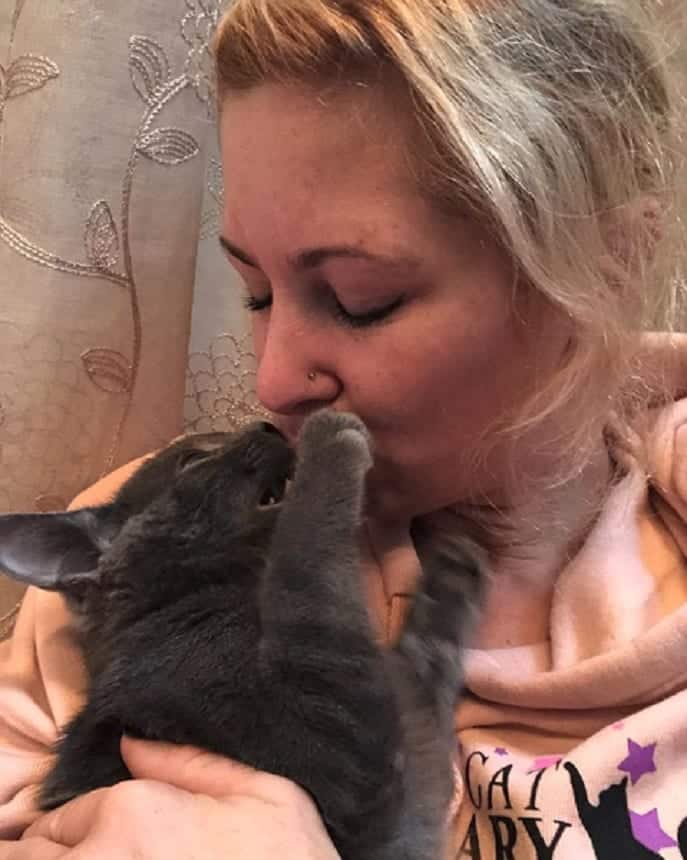 Wolfie had a long way to go to fully heal though.

Tara knew his eye would require special attention. But they’d have to wait until his doctors gave the approval to move forward. It was just too risky to proceed with the additional injuries he’d sustained.

He was neutered on October 8th, but while at the vet, Tara received devastating confirmation on his other injuries. 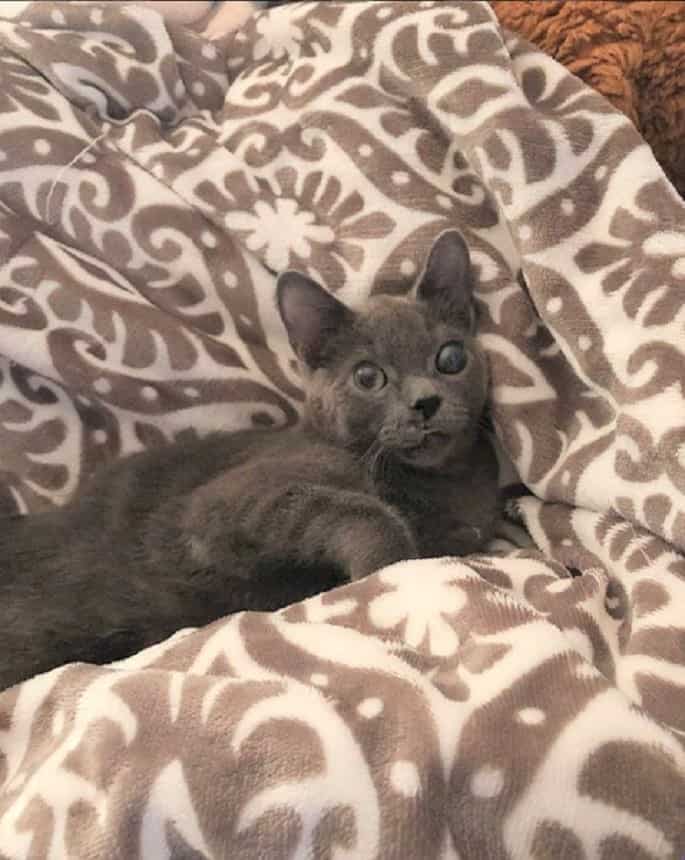 Through all of it he never stopped purring, playing or welcoming snuggles. The handsome little boy even got his very own Instagram page, like many of the other “Odd Cat” alum.

It’s an amazing thing that he was able to trust humans again.

Wolfie had a tumor in his eyeball, a shattered pelvis, and a fractured right tibia!
Even given the severity of his previous injuries, it’s remarkable he wasn’t on constant pain medication! He’d just roll around aimlessly without a care in the world. 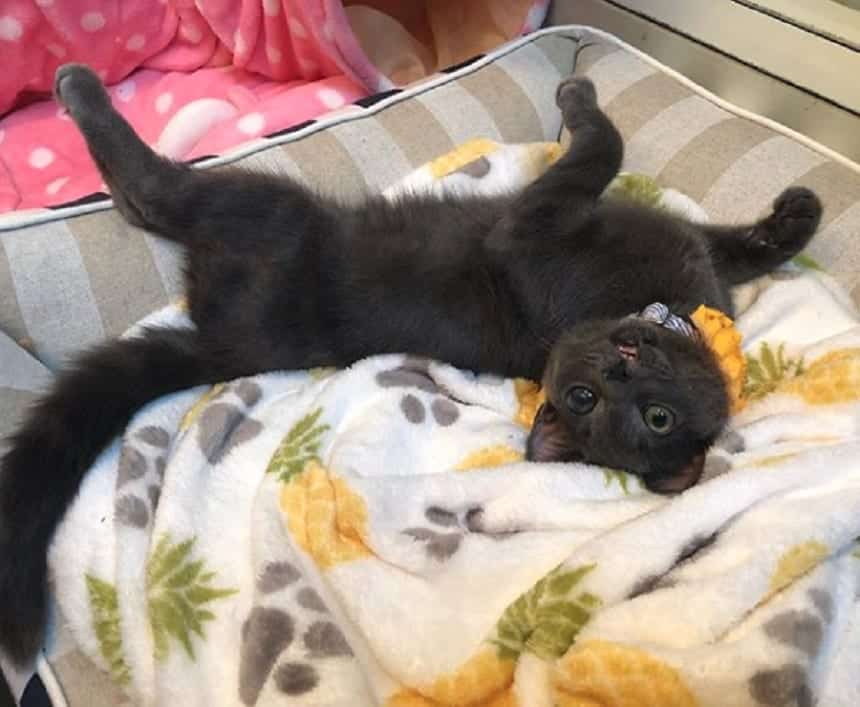 Tara was insistent on taking Wolfie to see an eye specialist. The Opthalmologist would be able to determine if there was any way to save his eye. Sadly, even the doctor was shocked at what he saw.

Wolfie’s eye was separated into layers, something he’d never seen before! 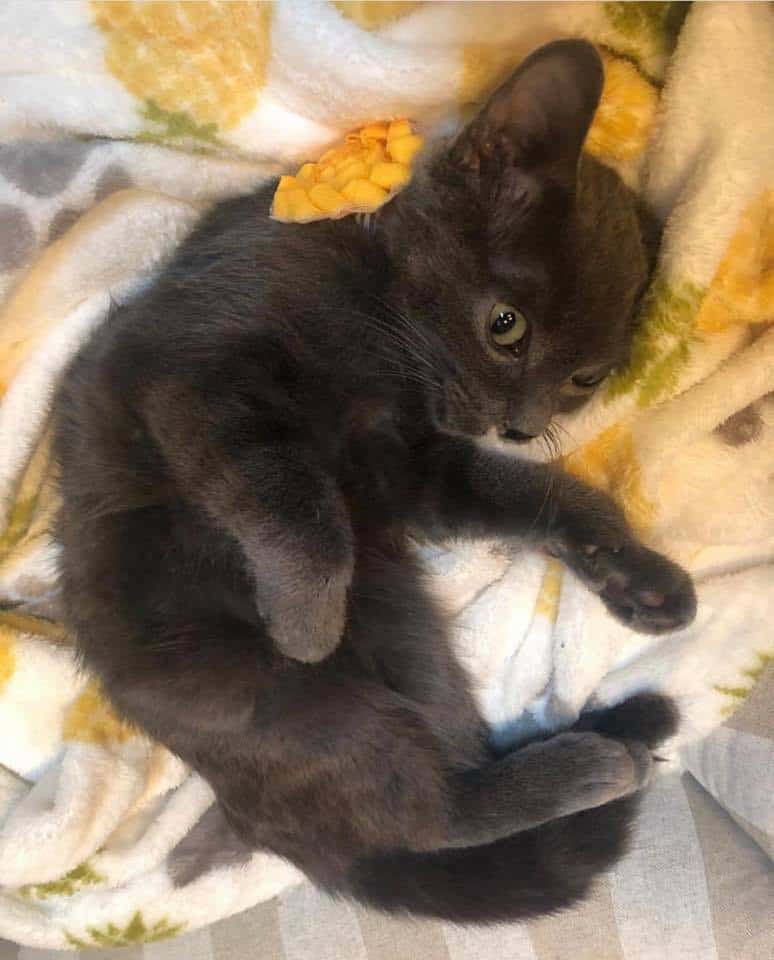 He would need to have it surgically removed, and the procedure was scheduled for November 8th.

For the next few weeks, formerly abused Wolfie continued to simply enjoy life like a kitten should.
He loved playing with toys and even allowed them to dress in him a cute outfit or two for Halloween. This made it even more disheartening that someone could harm such a sweet and chill cat. 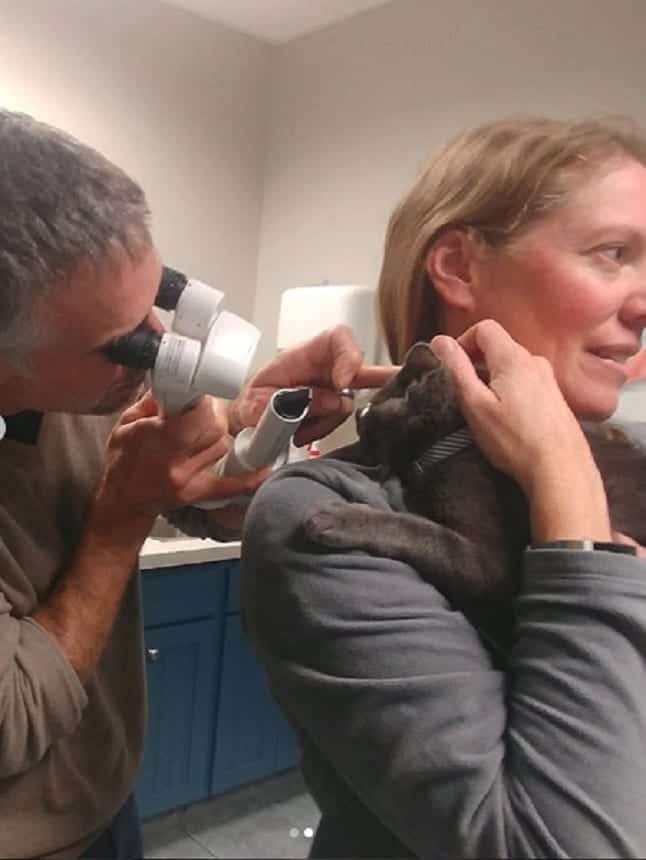 The day of his surgical appointment had finally arrived. Tara handed over the infant boy and awaited the outcome with bated breath. The 12,500 Instagram followers that the active kitty had amassed were right there with her. 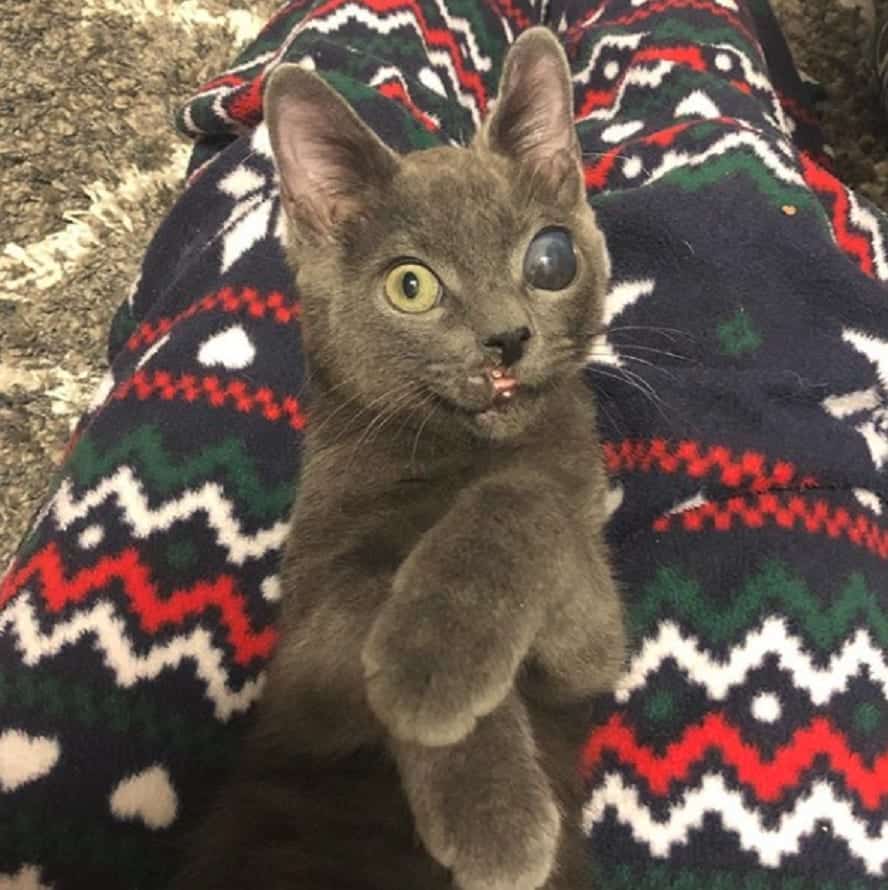 He would spend the next day in the ICU to ensure there were no complications. However, there was one piece of bad news.

More extensive x-rays were taken while he was under anesthesia. And sadly they discovered BOTH of Wolfie’s hips were broken! 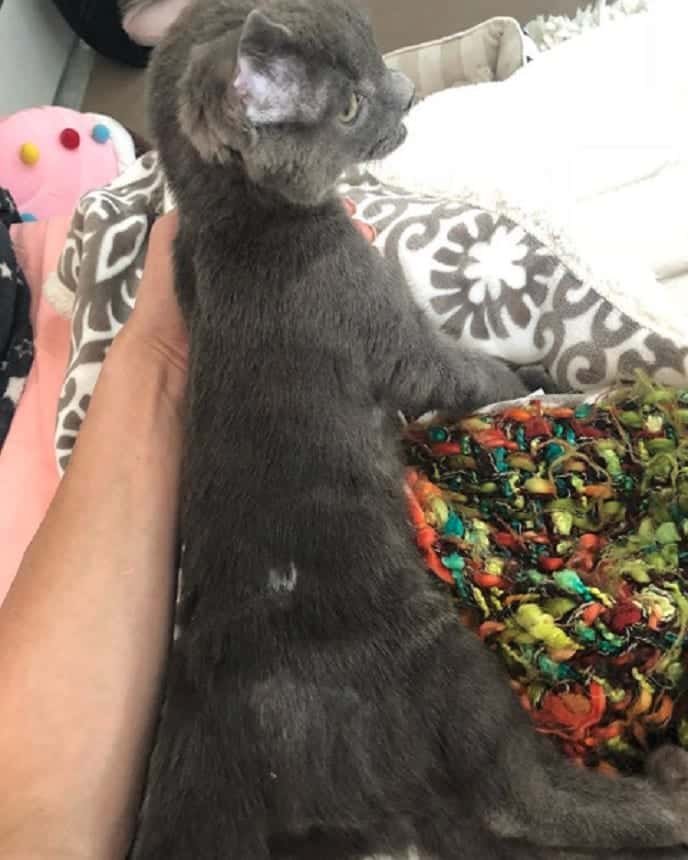 They’ll decide how to handle the hip and leg injuries when he recovers from the eye enucleation.

As soon as Wolfie returned home from the hospital, his fans were rewarded to another glimpse of his adorable little face!

“For all he has been though he’s the happiest sweetest guy”, says Tara. “He wraps his paws around your neck and pulls tight.”

His new friends and fans have been amazingly supportive throughout his ordeal. And he’s got some talented fans out there!!!