A wayward cat found the person who could provide him with the assistance he need (and he wasn’t about to take “no” for an answer).

Officer Rick Butler of the Oxford Police Department in Ohio was on duty early Friday morning when he came across the random feline. The brave orange cat apparently sprang out the cruiser’s open window when the police was stopping to check on a local church. After that, he demanded attention and pets. 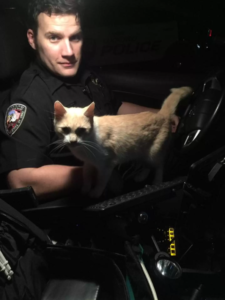 Butler, of course, was happy to oblige.

Butler may have assumed it would be a brief visit, but the cat had other ideas. Rather than slink away, the cat staged a sit-in once he’d gotten his fill of the officer’s adoration.

“[He’s] incredibly sociable and loving, and now he won’t get out of the cop vehicle!” According to the department. Was the cat being stubborn? Maybe. Did it pay off? Yes, yes it did. 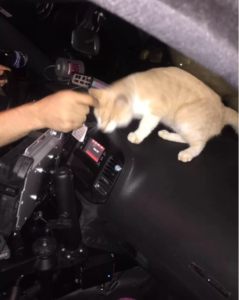 Thoroughly disarmed by the charming cat, Butler didn’t have the heart to turn the little guy away — so he let him stay. The police station doesn’t have facilities to house cats, so as the department announced online, Butler has decided to become his foster dad, at least until the cat’s rightful owner is found or someone comes forward wanting to adopt him. (The cat, “not the officer,” the police department was quick to clarify.) 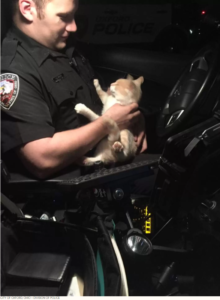 Butler confirmed to The Dodo that the cat is doing well and getting plenty of snuggles at home with him in the meantime.

The Oxford, Ohio Division of Police is looking for anyone with information on this cat or who is interested in adopting him.