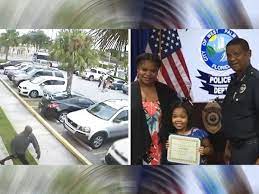 Law enforcement officials are calling 9-year-old Journee Nelson of Florida a hero for fighting off a robber who attacked her mother outside of Sabor Tropical Supermarket on Nov. 2.

On that day, Nelson and her mother, Danielle Mobley, approached their car in the supermarket parking lot when 29-year-old Demetrius Jackson sprinted at Mobley and wrestled her to the ground.

Surveillance footage shows Jackson as he tries to grab her purse, but before he’s successful, Nelson runs over to her mother and begins to punch the 29-year-old perpetrator’s face. Moments later, the video shows Jackson fleeing the scene while Nelson chases after him.

“She actually jumped up and chased him four houses down the block with me chasing her, calling her back,” Mobley said at a news conference, according to the Miami Herald.

According to WPTV, Mobley’s phone led police to an abandoned home, where police collected fingerprints and found the rest of the woman’s belongings.

In a lineup two days later, Nelson and Mobley identified Jackson, whose fingerprints police found at the abandoned house. Jackson has been charged with robbery and battery.

West Palm Beach Police Chief Frank Adderley held a press conference on Nov. 16 to honor Nelson for her bravery, which led to the case’s “positive outcome.”

In an interview with the Herald, Mobley said that Nelson is thinking of being either a police officer or teacher when she grows up. 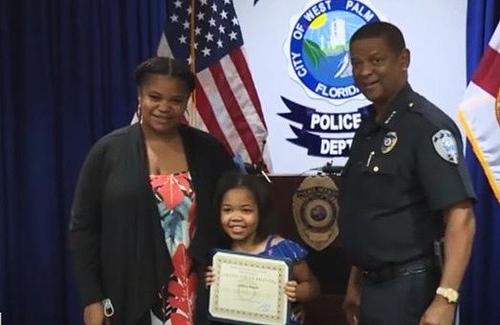 And to those who have seen the footage of Nelson’s bravery, it’s clear that she’s on the right path toward achieving those goals.

“I wouldn’t recommend that you confront an individual like that but in the heat of the moment things happen,” Adderley told reporters. “I bet he was shocked when she hit him right in his face, because you can definitely tell on the videotape that he was not expecting that and her actions were perfect timing in this particular situation and I think she hit him pretty hard.”

To commend the 9-year-old for her bravery, Adderley also awarded the girl with a medal, certificate and gift card, according to the Herald.

“I’m very proud of her that was her initial reaction,” Mobley told WSVN. “I wish we, sometimes, things could be a little different because she is still dealing with this mentally.”

In 2017, TODAY asked David Solano, a convicted thief serving 25 years to life, for tips to avoid getting mugged — and what to do if it’s too late.

Solano echoes Adderley’s advice, telling viewers that they shouldn’t try to fight back.

“Unless you’re a good fighter, that’s not a good idea, because you’ve just escalated the situation,” Solano told TODAY. “It might even make a person angrier … Give it up. It can be replaced.”

Instead, Solano said that you should keep walking and maintain your distance if someone suspicious tries to stop or talk to you. And if you do get mugged, be sure to make a lot of noise.

“A woman one time had a whistle … That’s a great idea: Whistles, air horns, anything that makes noise,” Solano explained.

What do you think of this girl’s bravery? What would you have done in her situation? Let us know — and be sure to pass this story of heroism on to others.