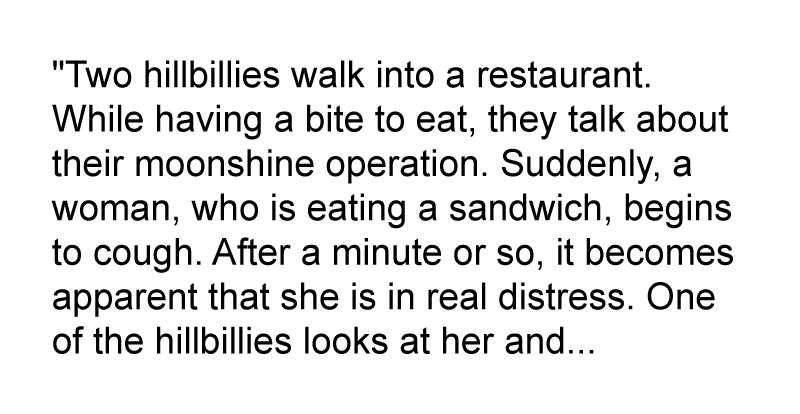 Two hillbillies had noticed a woman choking on her food by chance. But how they responded has the internet exploding in giggles!

As the two hillbillies walk into a local restaurant as they had decided to stop by for a bite to eat. While they dined, they talked about their moonshine operation.

All of a sudden, one woman sitting next to them (she had been eating a sandwich just right across their table) begun to cough. After one minute or so, she continued to do so. It became apparent that she was, actually in real distress.

One of the hillbillies became concerned, looked at her and asked: “Kin ya swallar?” The woman shook her head, signaling a no. Then he asks: “Kin ya breathe?” The woman has begun to turn blue in the face, but still somehow manages to shake her head once more.

The hillbilly then walked over to the woman, lifted up her dress, yanked down her drawers, and gave her right butt cheek a swift lick – with his tongue.

The woman became very shocked, so much so that she has a violent spasm, which caused her food obstruction to fly out of her mouth and out of her gullet. As she tries to breathe slowly and normally, the hillbilly walks away and back to his table.

His friend then told him: “Ya know, I’d heerd of that there ‘Hind Lick Maneuver’ but I never seed nobody done it.”